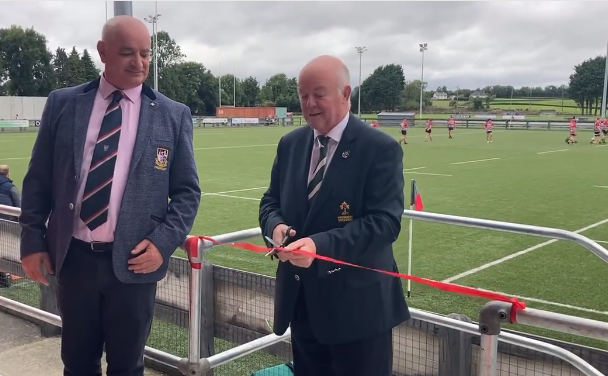 Newly elected IRFU President, John Robinson cut the ribbon at the official opening of the newly constructed stand in Mullingar Rugby Club last Sunday week just ahead of the Bank of Ireland Leinster League, Round 1 game between Mullingar and Carlow.

The stand boasts 425 seats stretching from 22 to 22, that will greatly enhance the experience of spectators on match days.

The stand provides an elevated viewing position and will provide protection from the elements during the inclement winter months.

The opening followed two years of planning including a submission to an Bord Pleanála and an appeal.

The summer of hard work and activity in Shay Murtagh Park included the spectator stand, a 20m long skills wall and an 800m walking track.

Mullingar President Conal Fitzgerald complimented all involved in the project and getting everything done in the off-season ensured there was no disruption to rugby. He also wanted to pay tribute to past-Presidents, committees and volunteers who, through their great work, had built Mullingar Rugby Club to where it is today.

The IRFU President John Robinson thanked the club for the invitation to preside on the opening and commented on the excellent facilities that were available in Mullingar Rugby Club, how the spectator experience would be much improved with the new facility and that it was one of the best structures in the country.

Denis McDermott, chair of the Fundraising Committee outlined the next phase of the development works in Shay Murtagh Park which will include installing solar panels on the roof of the stand which will allow the club to sell 40 kwh of electricity to the grid, while also upgrading the lights on the main grass pitch to 400lux low energy LED lights.