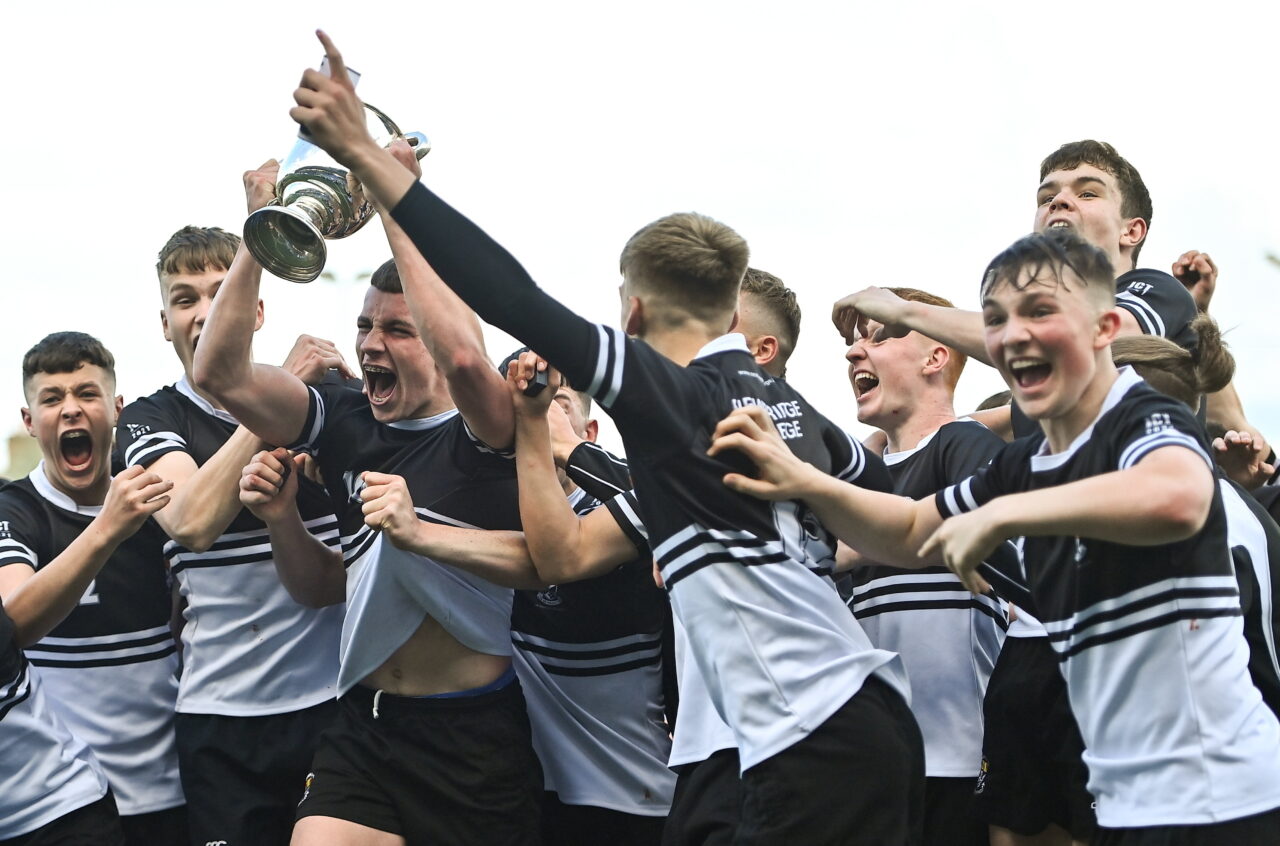 Paddy Taylor amassed a personal tally of 14 points at Energia Park as Newbridge College were crowned Bank Of Ireland Leinster Schools Junior Cup champions at the expense of Blackrock College.

Thanks to eight points from the boot of Taylor – and a well-worked try from Todd Lawlor – the Kildare school found themselves 13-0 in front at the break. ‘Rock fought back on the resumption with five-pointers by Jack Angulo and Brian O’Flaherty, but it wasn’t enough to deny Newbridge a superb victory.

Having shared the title at this grade in 2020 – after their final meeting was cancelled due to the COVID-19 pandemic – it was quite apt that Newbridge and Blackrock were the teams that advanced to this year’s decider.

While both teams played a free-flowing, attacking style in their respective victories at the penultimate stage (Newbridge overcame Castleknock College, while ‘Rock saw off the challenge of fellow Dubliners Terenure College), this was expected to be a much tighter affair.

Courtesy of powerful carries from Niall Smyth, Thomas Butler and full-back O’Flaherty, ‘Rock were establishing an early foothold in the game. Their Kildare counterparts were digging deep in defence, but found themselves under the cosh when Conor O’Shaughnessy kicked a ‘Rock penalty to the corner on the stroke of 10 minutes.

However, Newbridge secured possession off the ensuing line-out and consequently broke the deadlock three minutes later.

Team captain Taylor came into the contest on the back of superb form in their previous successes over Belvedere College and Castleknock College. The out-half contributed 24 in his side’s quarter-final win at the expense of Belvo, before amassing a personal tally of 18 points in the latter fixture. 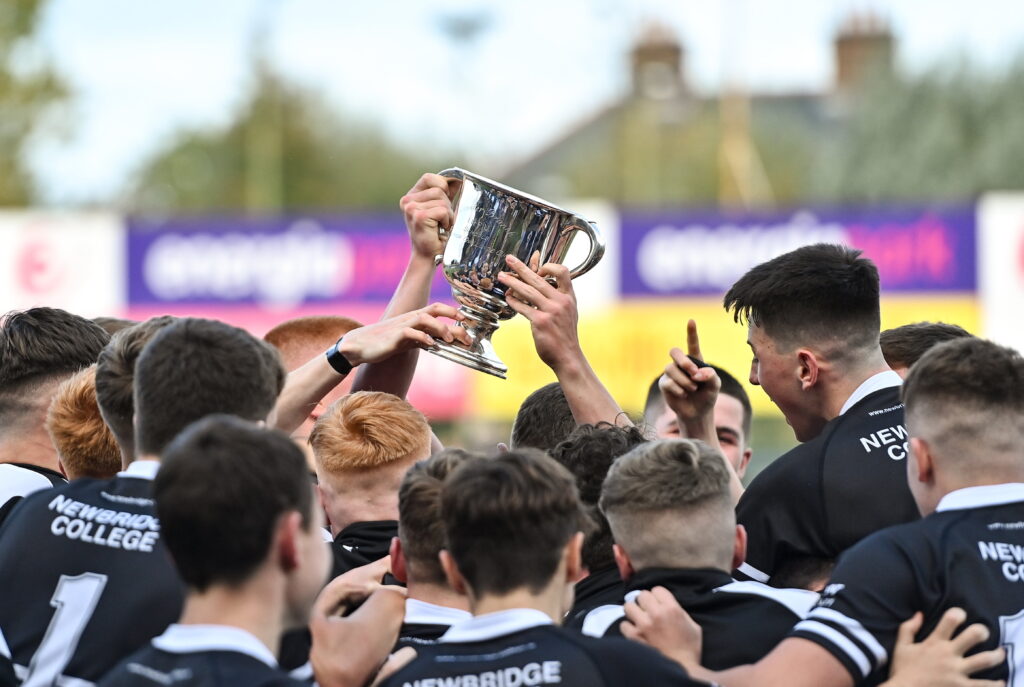 His dead-ball prowess was in full display during these convincing triumphs and he made no mistake by slotting a penalty from a left-hand angle between the posts. Newbridge grew in confidence as a result of this deadlock-breaker and were increasingly forcing the ‘Rock defence on the back-foot.

Additional pressure from the Newbridge pack led to another penalty just outside the ‘Rock ’22’ with just under 21 minutes gone on the clock. Taylor once again stepped up to the kicking tee and proceeded to double the ‘Bridge lead with minimal fuss.

As a result of these scores, Dave Brew’s charges visibly grew in confidence. Although ‘Rock did their utmost to respond, they were increasingly forced on the back-foot as the interval quickly approached.

Newbridge were moving through their attacking phases with patience and composure, and were given their just reward when full-back Lawlor touched down from a kick in behind on the half-hour mark.

This try was supplemented by a Taylor bonus strike to offer Newbridge a 13-0 cushion as they headed into the dressing rooms at the break.

While this put ‘Bridge in a strong position, there was still time for ‘Rock to edge back into contention. A strong start to the second period was required if the Williamstown school had designs on coming away with the silverware and that is precisely what they managed.

Gathering the ball at the back of a line-out deep inside enemy territory, ‘Rock skipper Angulo showed great acceleration to break over the whitewash in devastating fashion. O’Shaughnessy’s conversion added fresh impetus for the Metropolitan outfit and the same player cut their deficit to three points by dissecting the uprights off a 42nd-minute penalty.

Momentum appeared to be with ‘Rock at this juncture, but Taylor and Newbridge had other ideas. Having featured in their memorable 2020 campaign, the dynamic number 10 was determined to add another medal to his list of personal accolades.

He maintained his 100 per cent record off the kicking tee with a fourth successful effort on 44 minutes. This presented Newbridge with some much-needed breathing space and there was to be further joy for the Lilywhites inside the final-quarter.

After Calum Murphy had initiated an attack with a superb interception on the halfway line, Taylor added three more points to his already-impressive haul to leave Newbridge within touching distance of the crown.

This latest place-kick coincided with the sin-binning of ‘Rock out-half O’Shaughnessy. While he struck a penalty off-target upon his return, he was instrumental in his team’s second try five minutes from the end. 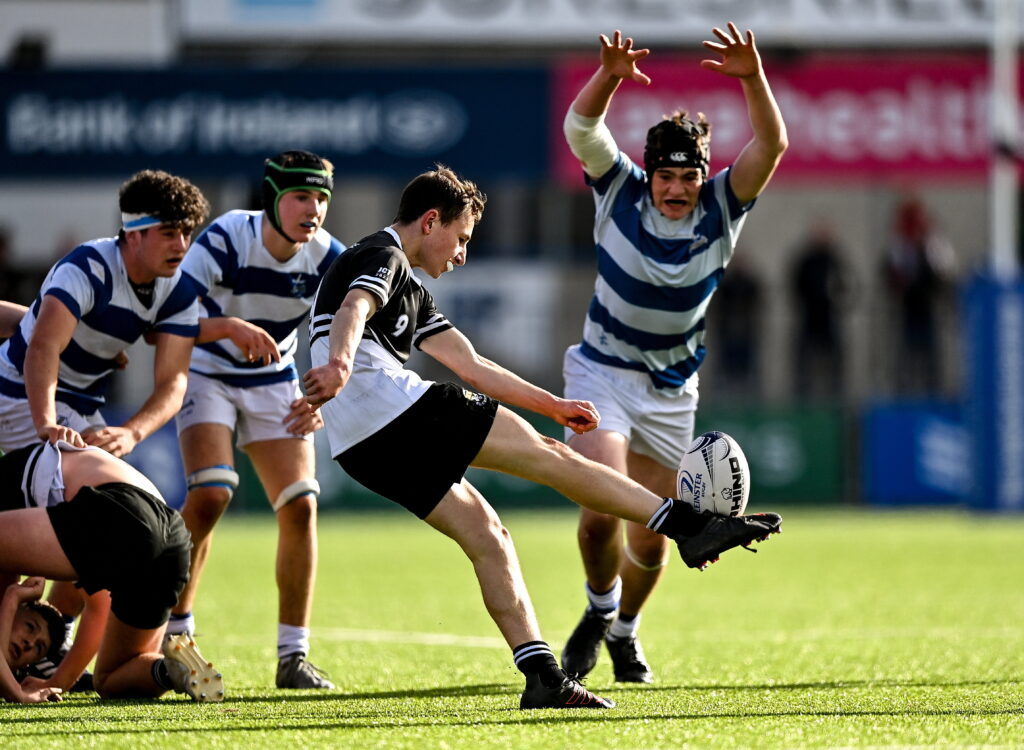 Following an excellent spell inside the Newbridge ’22’, O’Shaughnessy and Cian Dennehy-Vazquez combined for O’Flaherty to dot down on the right-flank. O’Shaughnessy couldn’t supply the extras from a tight-angle, but a tantalising conclusion lay in store nonetheless.

However, Newbridge kept their composure and – instead of kicking to touch with the hope of securing a line-out – they opted for a scrum off a 59th-minute penalty. This allowed them to retain possession until the very end of the game.

When the ball was eventually lofted into the stands, the passionate Newbridge supporters were sent into raptures.