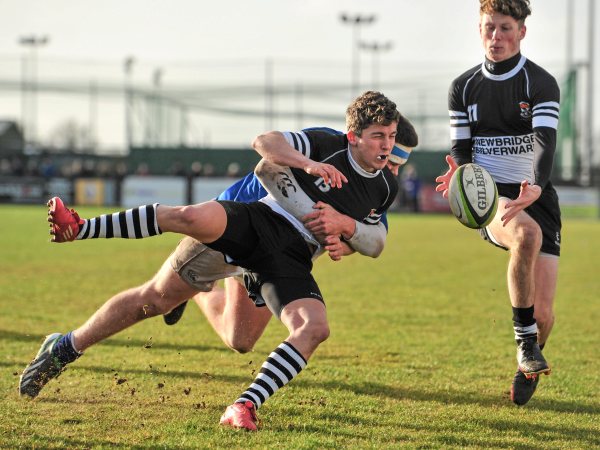 Luke Moran from Newbridge College writes about his school’s match against St. Mary’s in the quarter-final of the Beauchamps Senior Cup…

Before the match even began, both sides knew that the strong winds would be a major factor in the gameplay, and that the high ball was too much of a risk.

From kickoff, both sides had an equal share of possession, and an equal number of errors. Whether it was the bitter cold or the fierce winds, mistakes were made and a large number of penalties were given away in the middle of the field. From one of these penalties, Newbridge were given the chance to take the lead.

Winger Joe Darcy stepped up, but the kick was pushed slightly wide. The miss did not set Darcy back however, and within a few minutes, another penalty came his way. There was no mistake this time, and the penalty was converted from the middle of the field, 30 metres out. 3-0 to Newbridge.

From the restart there were signs of intent from both teams, but a try remained elusive. Chances were passed up, and great work from both packs saw the game remain low-scoring. The St. Mary’s open side wing forward in particular caused the Kildare side concern both in attack and defence. 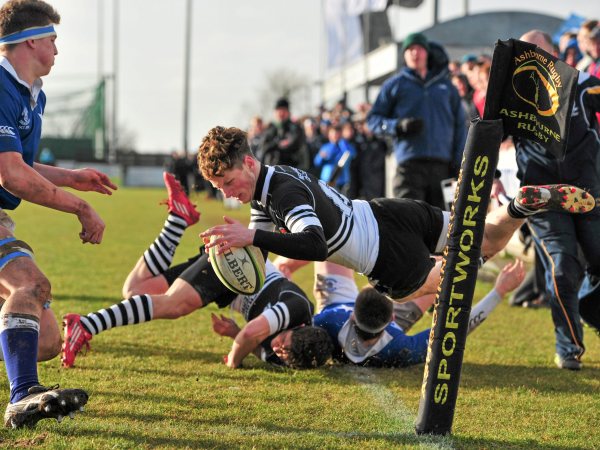 After a succession of penalties were given away by Newbridge, the Mary’s No. 10 kicked the ball effectively up the pitch each time, resulting in a line out just before the Newbridge five metre line. A well worked line out saw the ball go to a ruck, where a break was made by one of the Mary’s forwards and the try was scored.

Up to now the game was 50/50 but smart tactics from the Dublin school saw the try awarded. The conversion was not added; 5-3 to Mary’s.

Newbridge were rattled, and it took quite a while for the passing game to take effect. When it did, though, Newbridge got their reward. The ball was switched from left to right and vice versa for a succession of phases, with both forwards and backs taking part. A stellar Mary’s defence held out until a ruck was formed on the five metre line soon after a line out. On the left side of the field, flanker Matt O’ Connor saw his opportunity. He picked the ball up and crashed through the defence to make it 8-5 to Newbridge. From a difficult angle, Joe D’Arcy excellently converted to make it 10-5 to Newbridge at halftime.

And after a string of substitutions, the game began to take shape in the second half. Just as in the first half the sides shared possession. In front of strong support, both sides gave it their all, and it was Mary’s who scored next. With Newbridge caught out on an overlap, the Mary’s backs executed a move that saw the ball go to their winger. With the last man beaten, the No.14 scored on the right side of the pitch, leaving a tricky conversion to come. The No.10 could not convert, and Mary’s would rue the missed kicks. 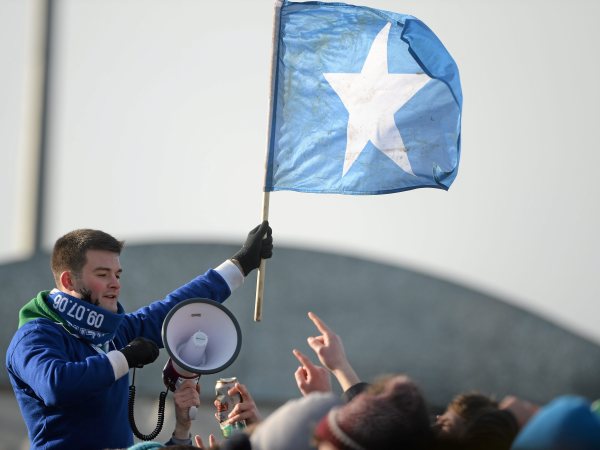 Newbridge restarted with a new found aggression, and prop Jonathan Phelan was continuously battering at the Mary’s defence. I was Phelan who scored next, as the ball was put in his hands five metres out on the stand side of the pitch. Sheer power saw him drive over the line, and the try was converted once again by D’Arcy. This made it 17-10 to Newbridge.

From this point, Mary’s stepped it up a gear with great phase play, but the Kildare teams defence was up to the task. The Dublin side came up just short on several promising chances and as injury time ticked on St. Mary’s knocked on to call the game to a close.

A close game that both sides dominated in parts, with Newbridge’s defence helping against a strong Mary’s attack.

Take a look at the full list of fixtures and results in the Schools Cup.