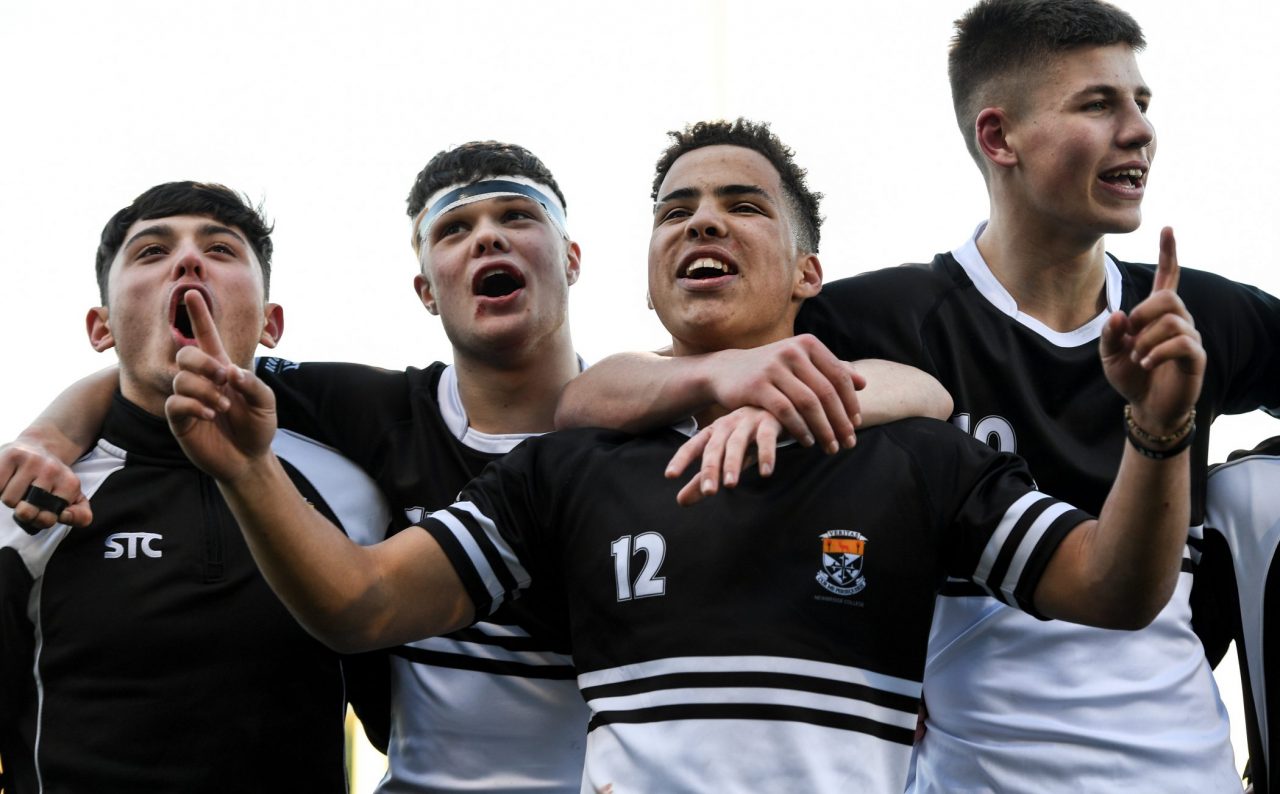 Johne Murphy’s side trailed 14-0 early in the game but showed extreme resilience and grit, with no shortage of skill, to come back and upset holders St Michael’s College at Energia Park this afternoon.

As the lead swapped hands in the second half, the dogged nature of Newbridge proved influential in sealing their place in the RDS Arena final.

The Kildare school came to Energia Park determined to unsettle St Michael’s as early as possible and some strong tackling and clever movement appeared to have done that.

However, an interception on halfway was returned all the way by Henry McErlean to give Michael’s the lead, followed on the restart by a yellow card to Mark Dennis for a high tackle. Newbridge’s positive start undone.

Michael’s doubled their advantage in the 14th minute when Lee Barron crossed over at the back of a strong lineout maul, again Chris Cosgrave slotted the extras.

From there, Newbridge were able to bring themselves back to the level of their earlier intensity and, but for a knock on deep into Michael’s territory, almost cut the deficit quickly.

Clever play between outhalf Sam Prendergast and centre Lucas Berti Newman created openings in the Michael’s defence who were eventually penalised allowing Prendergast to send a penalty between the posts.

When the outhalf fed his captain Marcus Kiely on the stroke of half time, it looked like they would be going in with the deficit reduced even further but the big centre lost his footing as he collided with Cosgrave and Barron was able to force a penalty.

Instead, they were made to wait until after half-time, and the 40th minute, for their first try.

Again, it was orchestrated by Berti Newman and Prendergast who sliced through Michael’s and scrum half Cormac King provided the support line to score.

The Ailesbury Road school reacted well with big prop Jack Boyle showing his athleticism with two breaks from deep, the first of which led to a penalty that Cosgrave converted.

Another wave of attack followed from Newbridge and a big tackle from Barron was needed to prevent Kiely from scoring but that upset was rectified with three points from the boot of Prendergast.

That joy turned to delirium for the Kildare school’s support when winger Donal Conroy flashed from his own half all the way into the Michael’s corner to give his side a one-point lead.

The holders weren’t willing to let their title go easily though and full back Cosgrave began to run at Newbridge, creating a try for Eddie Kelly to edge them back in front.

Again, Newbridge would not be content with just challenging the favourites and created another opportunity when Prendergast’s loop pass found David O’Sullivan who was still able to make his way into the corner after putting in a massive defensive effort in the 62nd minute.