Newbridge link up with French club… 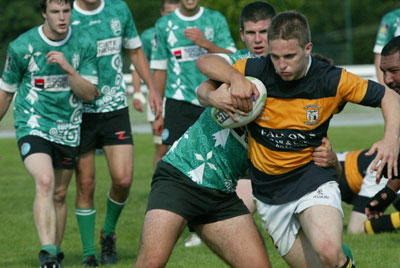 Paddy Kennedy met with his counterpart, Emile Blandeau, from Argentre du Plessis which hosted a tour party from Newbridge Rugby Club as part of an Irish festival. The 50-strong tour party brought Newbridge mayor and fellow Town Councilor John Deely to sound out the possibility of an official twinning between the towns.

Argentre is a town of 4,000 located just 30 kilometres west of Rennes, Brittany’s largest city and boasts superb sporting facilities. Local rugby player and a regular visitor to Ireland, Louic Vaisson, made the first contact between Aurore Rugby Vitre and Newbridge RFC last year. Keen to strengthen his home town’s ties with Ireland he organised the rugby game against AR Vitre to form part of the weekend-long Irish Festival.

It is hoped that local schools will be able to set exchange arrangements for local pupils who want to improve their French language skills. Several members of the touring party were hosted by local families and already plans are being made to return the favour.

“The hospitality and the generosity we were shown was just unbelievable,” said Newbridge RFC spokesman, Eamon Dillon. “They pulled out the stops and made everyone of our group feel at home. There was a real sense of being invited into the community,” he added.

The Irish group were welcomed at a formal reception in the Town Hall on the Friday where Mr Blandeau expressed his delight at receiving the visitors.

On behalf of Newbridge RFC, Mayor Kennedy presented a commemorative silver plate from Newbridge Silverware to his opposite number. While the rugby team trained in the afternoon the non-players enjoyed a tour of a local orchard and cider-producing farm. That night the village turned out to watch a top-level cycle race known as ‘criterium’ through the village.

On Saturday in the town’s municipal sports grounds over 1,000 spectators turned out to watch the game. The Irish team’s appreciation of their hosts didn’t extend to the pitch where they won 55-16 in a full-blooded encounter. The appetite for winning continued the next day when a group of the Newbridge players won the festival’s tug o’war competition.

The town of Argente du Plessis is an old farming village that has existed for hundreds of years and dominated by an impressive stone Church. Many of the townspeople also have deep roots in horse-racing which bodes well for future links between the two towns.