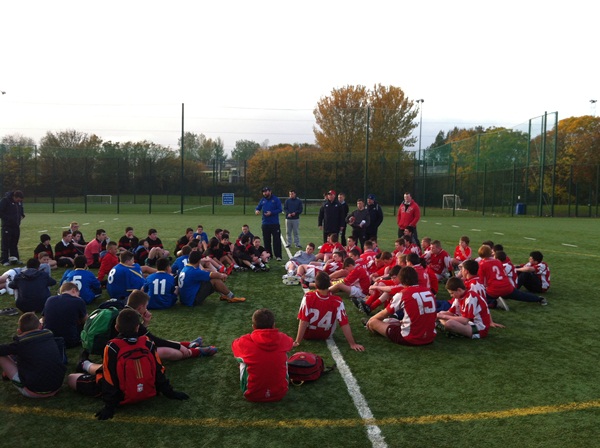 The brisk winter weather wasn’t able to discourage great numbers from the first year contact blitz in North Dublin City and for those parents and coaches that attended a treat of running rugby was in store.

The Blitz is the first in a pathway to get kids from these and other schools in the area to play in the post-Christmas DCC Cups. Handling and tackling were focused on and a follow up blitz that will introduce scrummaging and lineouts will happen in the next few weeks.

Players from St Kevin’s Finglas, St Vincent’s Glasnevin, St David’s Artane and Chanel College Coolock served up a spectacle of free flowing rugby and there were some fantastic scores and indeed some try saving tackles to saviour as well. It was hard to believe that 95% of the players have never played club rugby at any level and that is a statistic that is certain to change in the near future with representatives of some of the local clubs in attendance.

Youth Co-ordinator for Unidare RFC, Kevin Furey was very impressed with the efforts all round, “there are some really good individuals on show but what’s most impressive is the overall levels of all the teams involved, it’s clear to see a lot of hard work has gone into their training in the schools and that’s a credit to the dedication of the teachers as well as the pupils.”

With training starting in three further secondary schools in the area pre-Christmas, this season’s inaugural DCC Cup should be one to watch. For any more information on rugby in the DCC North area, contact CRO Colm Finnegan at colm.finnegan@leinsterrugby.ie or on 0877692257.