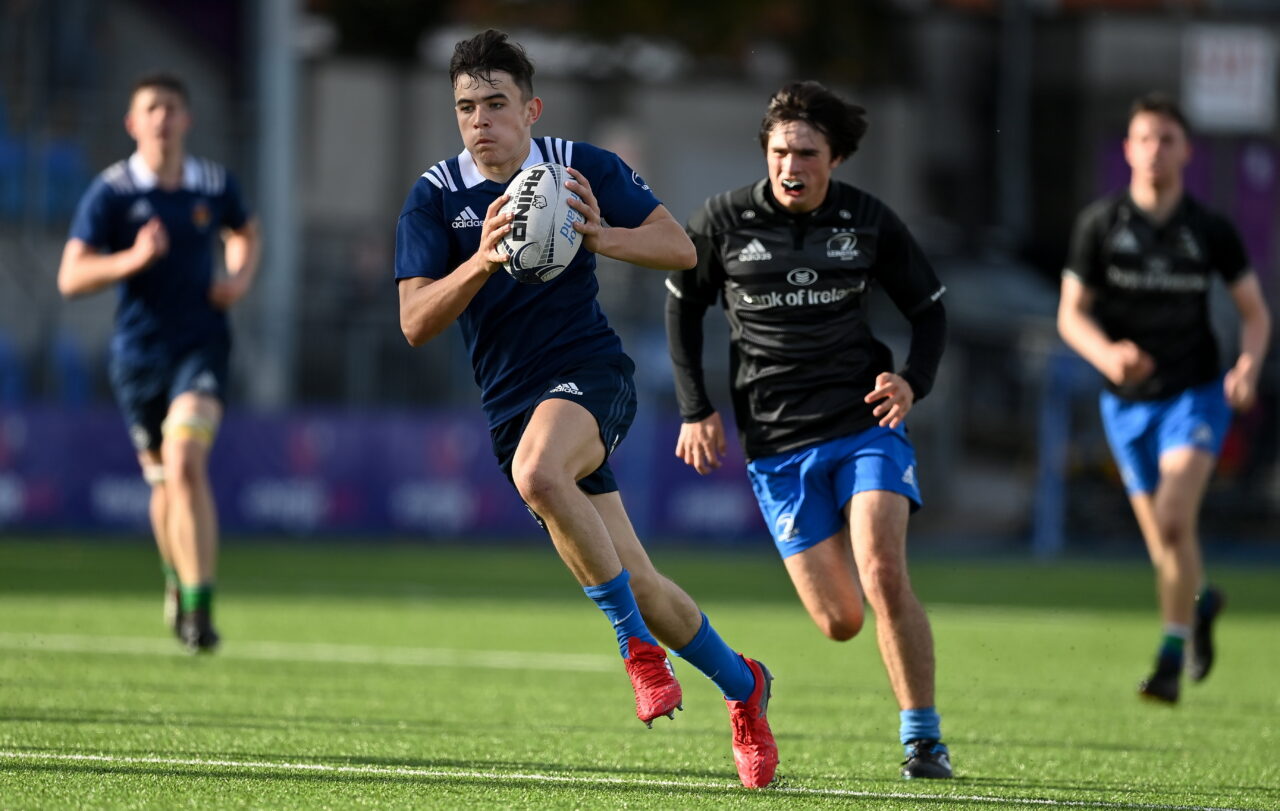 Round three of the Bank of Ireland U-17 Shane Horgan Cup took place at Energia Park on Thursday, 28 October.

North Midlands kicked off proceedings with a narrow one-point victory over Metro before North East pipped South East in a thrilling contest.

The North Midlands just about deserved to hold on against Metro in the first of the round three games.

Quickly from the off, they sought to bring their big runners onto the ball with James Walsh and Padraic Cullen’s metre-making carries undone by Metro loosehead Gordon Tracey’s nose for the ball on the floor.

The willingness to move the ball at close quarters was admirable even though it played into the clutches of the technically sound Tracey for his second turnover penalty which Will Saunders could not quite put on target from distance.

A fine back move put PJ Larkin into open ground and an inside ball to Jake Darcy looked to be a try-scoring pass until a tremendous tackle by Gavin Keane.

North Midlands kept the pressure on long enough to force a penalty for Harris to strike the lead points in the 14th minute.

When Metro tighthead Daniel Colgan got isolated Oisin Bannon nabbed a turnover to keep North Midlands on the frontfoot.

Harris made significant headway through the Metro defence and found Larkin on a stunning support line for the first try in the 17th minute.

A simple mistake in midfield offered Metro the chance to bite back. Flanker Ethan Fennell’s lineout take was the basis for a maul and prop Colgan powered over to make it 8-5 in the 23rd minute.

Just when North Midlands were on the verge of recovering control, Adam Gray stepped up for an intercept try that Saunders converted for 12-8 at half-time.

North Midlands were back in front from a super move in which Cullen, Cawley and Harris all handled sweetly to put scrum-half Dylan Kelly in for a try, converted by Harris for 15-12 in the 40th minute.

But, they were living dangerously, flanker Cullen taking them out of trouble with a powerful surge and wing John Murray coping with an angled ball by Luke Ingle. 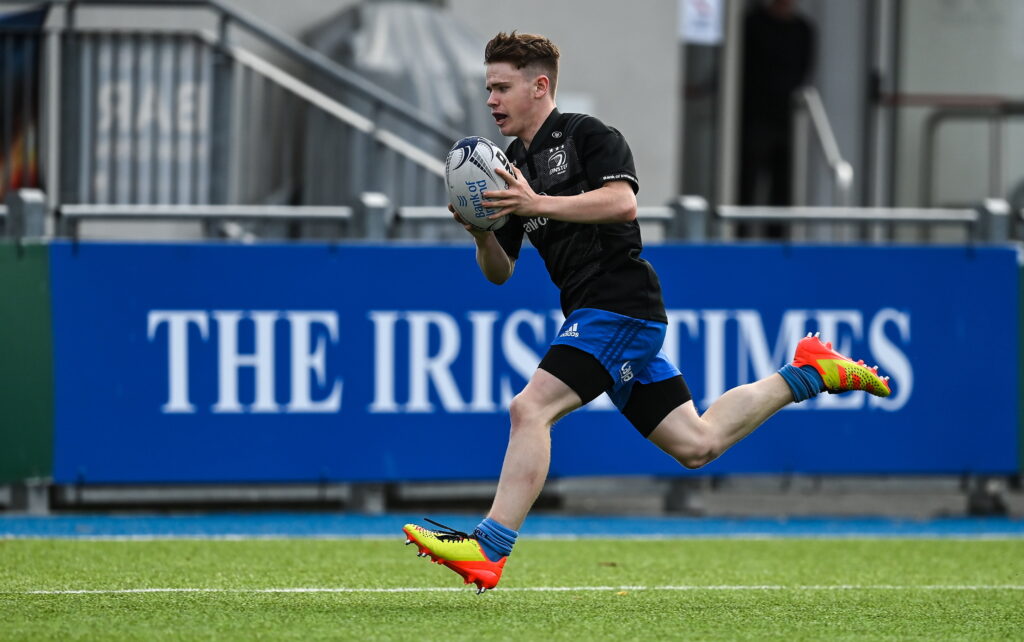 Metro were beginning to edge the territory until a sweeping counter-attack prompted by Max Gaynor, Harris and Larkin changed the momentum in a game of swinging fortunes.

They could not apply the finishing touches in the face of a resilient Metro defence, led by Shane Moore, until replacement James Corcoran scooted up the left wing to make it 20-12 in the 65th minute.

Metro had the last say when full-back Mark Cleary’s mixture of footwork and acceleration proved too much for North Midlands and Saunders conversion made it a one-point game as the final whistle blew.

The North East needed to rely on a whopping 22-point lead in the face of a terrific second-half comeback by South East in the afternoon’s second encounter.

This was a meeting between the two unbeaten teams in the competition. It showed immediately in the level of intensity and organisation.

The South East almost got out to the perfect start from Shane Duffy’s scything break and, in response, North East’s Luke Carley grounded the ball only to be called back for a forward pass in a hectic opening period. 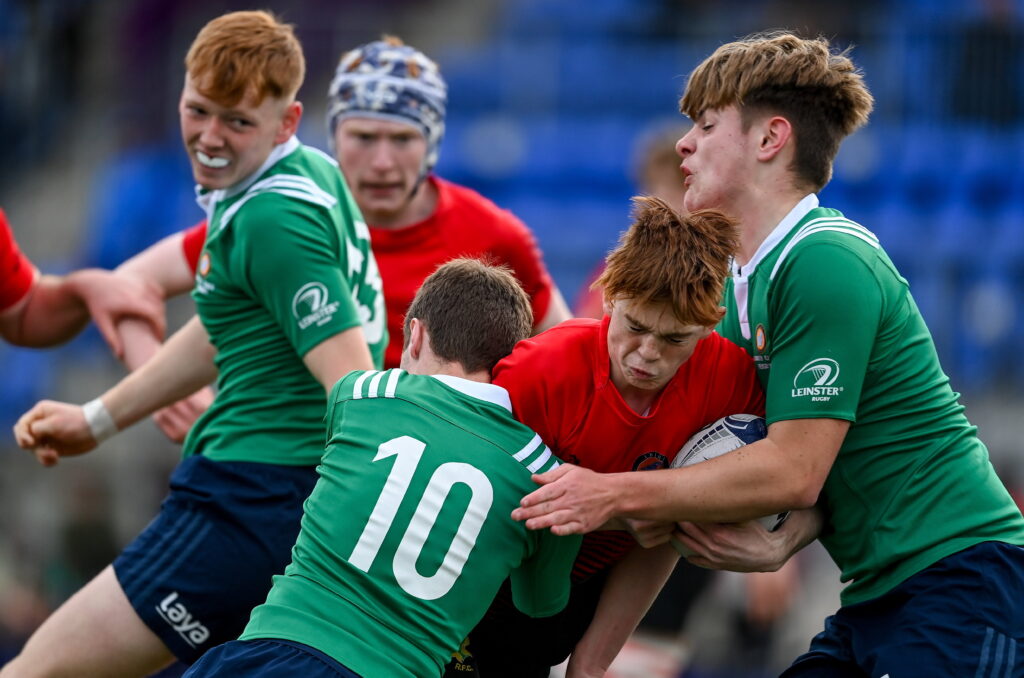 North East came again, scrum-half Jamie Byrne sniping the short side and flanker Oisin Cunningham was on hand to twist to the whitewash in the 10th minute.

The running threat of Tadgh Duff, barrelling bursts of Mahon Ronan and a line kick from Duff enabled hooker Morgan O’Reilly to crash over in the corner, Carley converting for 12-0 in the 18th minute.

The impact of Ronan, Cunningham and Lincoln de Year was having an impact and, from a scrum on the right, de Year fed scrum-half Byrne, who put Loclainn Harris over on the right for a 17-point lead.

It wasn’t long before Duff was breaking the first line of defence again, quick hands combining for Carley to pick up the fourth try.

Even when centre Conor Fahy looked like providing a morale-boosting score, Tom Deering cut him down in the tackle.

Eventually, South East did manufacture a try, Duffy threatening, Fahy making the posts and Burgess converting for 22-7 at the break.

North East looked to put the game beyond doubt with yet another try from a quick raid down the left, Cunningham exploding into the corner in impressive fashion for 27-7 in the 41st minute.

However, the persistence of Noah Cope and Cillian Moore found reward when blindside Cian Cashman got downward pressure on the ball for Burgess to convert from the left.

A mesmeric, mazy break from replacement Moore turned the North East defence inside-out until the ball went to ground at the end of the third quarter.

That man Moore was there again to set up Fahy to ghost past defenders and, when the recycle came, Moore was back in the line to finish well in the right corner, closing the gap to 27-19 on the hour. 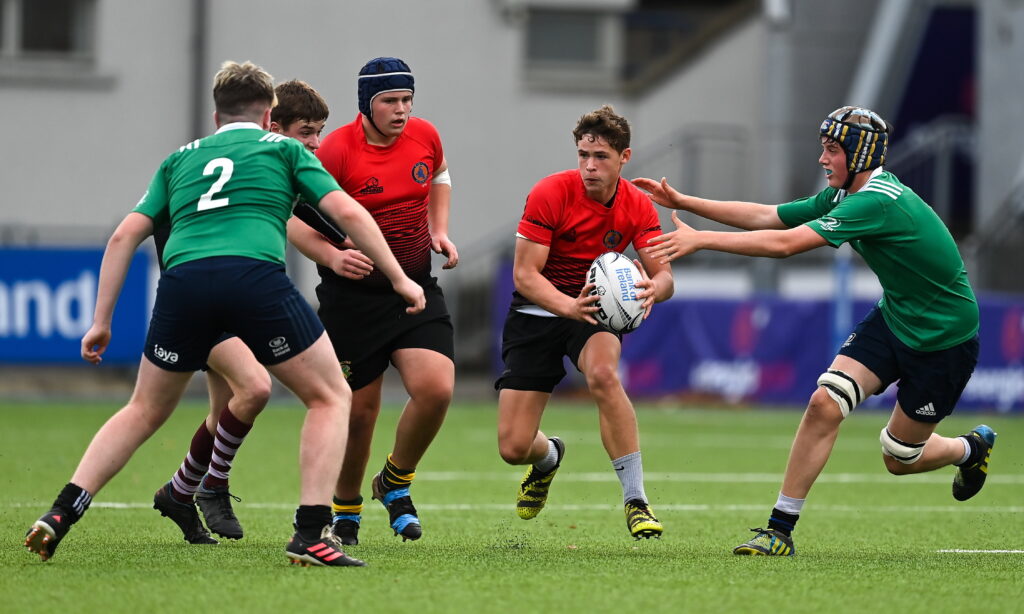 The momentum had completely changed. In a flash, Burgess was into a gap and sniffing out an unlikely comeback, No 8 Ronan agonisingly losing the ball in the act of scoring.

No matter, they got what they were looking for when Ronan broke from a scrum and Neil Byrne sprinted in at the right corner in the 66th minute.

South East had one last chance when Byrne’s pace was a problem which North East just about solved in a thrilling climax.