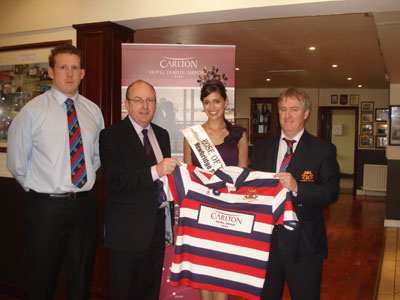 North Kildare RFC have been boosted by the news they have secured a two year sponsorship deal with the Carlton Hotel Group. Carlton Hotels are an Irish owned group with 10 luxurious 4-star properties all over Ireland…

They have grown hugely over the last two years and have the perfect locations whether it’s for business or for the family with all 10 hotels family-friendly.

They also sponsor the Rose of Tralee festival and pictured above is this year’s winner Clare Kambamettu, the London rose. Clare moved to London last year but she originally hails from Athy, who are ironically one of North Kildare’s biggest rivals for promotion from Division 3 this season.

Kildare have just qualified for the ‘Super 6’ competition in Division 3 of the Leinster league. They finished second in their pool following victories over Swords, Balbriggan and an Arklow side which included ex-Ireland international Shane Byrne.

They now go into a 10-game league with Malahide, Balbriggan and the top three sides in the other pool, with the top two being promoted. Prior to the league Kildare almost qualified for the Hosie Cup final but were edged out by Portarlington, although they did defeat Division 1A side Newbridge in the pool stages.