North Kildare honoured with Team of the Month award… 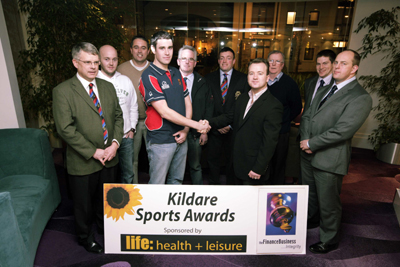 The award covers all sports in the Kildare area and the winner is picked by a group of journalists and commentators from Kildare’s newspapers and radio station KFM.

Kildare are currently top of Division 3 in the Leinster league 12 points clear of their nearest rivals Athy. They have won all 10 of their matches scoring 35 tries conceding only five.

Kildare’s finished in mid-table last season in Division 3. However there was some good news in the Provincial Seconds Towns cup as Kildare made the final, losing out to Portlaoise in extra-time. That cup run has contributed to this year’s success as six of the team that day have made the step up to the first team.

Kildare have been unstoppable in the league so far this year recording bonus point victories over CYM (twice), Malahide, Swords, Wexford and Birr. In tougher games they have beaten Athy, Balbriggan, Railway Union and Birr. The league now has a month’s break for the Towns cup but with six games remaining it will take a major slip up for Kildare not to win the league but they are taking nothing for granted and know that if they win their next four matches the league should be theirs.

Five of the pack played a in last season’s seconds cup run Seamus McCluskey, Paul McInerney, Ross Moran, Alan Morrin and Eddie Hopkins who is captain this year. Added to this Rob Landy, James Hinde and Gavin Satchwell have been impressive, Cathal Doyle came back from UCD and Rob Darcy always gives 110%. In the 2nd row Eric Branigan has been partnered by Darragh Toner, brother of Leinster player Devin and he has been a revelation.

Kildare’s backs have kept up their form of recent seasons running in tries of the highest calibre with some devastating pre rehearsed moves. Danny Smith has slotted in more than adequately at scrum half after his arrival from New Zealand. Gareth Gilmore and John Houlihan are solid in midfield, Scott McGrath, John Reilly and Eric Roberts have all played their part. Kildare’s top try scorer Ivan Stynes has scored seven tries but has had to move to the Netherlands due to work commitments. Kenny McDonald’s trusty left boot has contributed 56 points.

North Kildare are coached by two former players; forwards coach Sean Feeney is has made a major difference as the pack have been on top in virtually all their matches. The other coach Ross Brady played at full back on the 1st team for 11 years before a knee injury cut his career prematurely short at the age of 29. When playing he was always a consistent performer and his dedication to training was second to none so it is no surprise he has carried that over to his coaching duties.

North Kildare continue to thrive at youths level fielding teams at Under-8’s through to 20’s this season, they competed in the Metropolitan cup last season for the first team and did extremely well.

So all is looking well for North Kildare’s 2nd promotion from Division 3 in four seasons but the aim this time will be to build on this success and hopefully look forwards and upwards. They face Kilkenny in the Towns Cup tomorrow afternoon at the Maws and will hope to add a cup upset to their list of tremendous league results for the season.