North Kildare player a star of field and screen…. 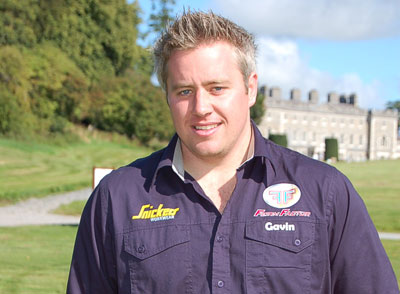 North Kildare’s promotion to Division 2 was not the only cause for celebration in the clubhouse on Sunday night. First team tight head prop Gavin Satchwell reached the final of TG4’s reality farming show Feirm Factor. Twelve contestants started on the show eight weeks ago and now Gavin has made it to the final three, with the winner taking home a brand new Land Rover Discovery 4 jeep.

Each week the 12 farmers from around the country compete in a number of tasks with one contestant eliminated X-Factor style each week. As 1 of the youngest contestants on the show, Gavin has improved with each episode. In episode 1 he proudly wore his North Kildare jersey as he told viewers his two passions in life are farming and rugby, and oh his girlfriend if he gets time! Gavin lives on the Moyglare road in Maynooth and looks after two farms for the family in Maynooth and Athboy with his father Roger. The Satchwell family have a great tradition within the North Kildare club for both Rugby and Cricket.

Gavin has enjoyed making the show immensely. He got on well with everyone and his stayed in touch with most of the other contestants. He admits he came across a bit shy and quiet at first as he found the cameras a bit daunting. But over the course of the series he has grown in confidence. Gavin has also enjoyed a bit of superstar attention around the town in Maynooth and has been recognised on a number of occasions.

Looking forward to the final Gavin says it would be an “amazing feeling” to win the competition but knows he is up against two very strong contenders and either way it has been an unbelievable experience appearing on the show.

The final will be broadcast on Sunday, 20th March at 8.45pm on TG4 from the beautiful grounds and rooms of Charleville Castle, Tullamore, Co.Offaly. The three finalists will also be appearing on the Saturday night show with Brendan O’Connor on Saturday night on RTE 1. So there will a huge crowd gathered in the North Kildare rugby club on Sunday evening to hopefully cheer Gavin to the title of Feirm Factor champion 2011.