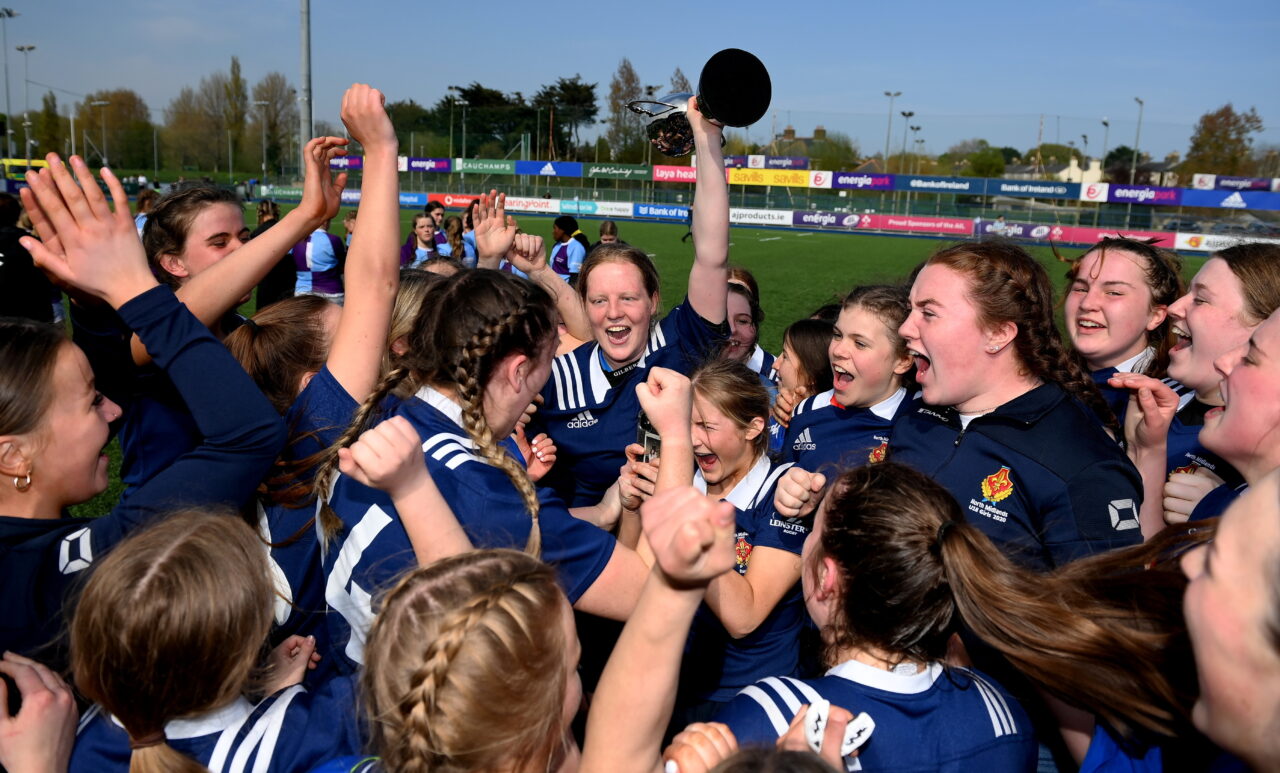 The family of Sarah Robinson were in attendance to present the trophy named in the honour of the courageous young woman, taken far too early in life.

“As Sarah’s family, we are very proud to be here today and to represent Sarah,” said her father David.

“Sarah’s dream was always to play for Leinster so the competition for the Sarah Robinson Cup will keep her memory alive going forward.

“One of Sarah’s favourite sayings was ‘go big or go home’ and I think having Sarah’s name on this trophy is big for our family.

“I think Sarah would be overwhelmed by the gesture.”

It was easy to imagine Sarah smiling down on four squads that really embraced the challenge to ‘go big’ in the sunshine at Energia Park.

There was confusion at the final whistle when the South-East girls believed they had won the competition based on the first-try rule when in fact the league format dictated that it went to the table where North Midlands were superior by one point (17-16) after four rounds.

Their Ireland international Koren Dunne showed her class with the first burst of the game, followed by a half-break by South-East’s Ciara Short and two threatening moments from Grainne Flynn.

It wasn’t long before Dunne was away again, splitting the midfield defence to go one-on-one with fellow international Robyn O’Connor, the full-back corralling the No 8, not once, but twice.

At the other end, centre Kate Corrigan made ground on the left for O’Connor to be one accurate pass away from connecting with Flynn.

The South-East back row of Prudence Isaac, Orla Wafer and Jane Neill was instrumental in providing the front foot for Jess Griffey and Eve Prendergast to go close.

Heavy pressure from a charged-up defence forced a five-metre scrum for South-East and a carry by Neill from the base created the room for wing Ciara Byrne to make the line in the 17th minute.

The confidence was up and a period of sustained handling and recycling put Prendergast in sight of the line until, somehow, Amy Rushton ripped the ball away.

A stunning turnover by Jess Griffey almost led to an intercept try for North Midlands wing Hannah Wilson only for O’Connor to cover the move amid frantic action.

The problem for South-East was that they had all the ball without punching in enough of points, Corrigan and Flynn repelled by solid defence, led by North Midlands lock Amy Lynch and Dunne, keeping it 5-0 at the break.

The North Midlands made a better go of the new half, the passing of Lynch making room for others. But, the hard-tackling of Aoife Nixon and Neill was eye-catching in turning the ball over.

In the blink of an eye, South-East out-half Molly O’Gorman was through a gap and using her footwork to hoodwink the last defender only to slip in the process.

Then, the ball slipped from the grasp of O’Connor before a rip in the tackle by Griffey and sticky offloading allowed Nixon to pile over bodies for the second try, O’Gorman converting for 12-0 in the 42nd minute.

Once again, the continuity of South-East in moving the ball through the hands of backs and forwards took them to the brink of another five-pointer as Ava Kavanagh and Byrne probed on the left.

At last, North Midlands were able to put together a series of phases for Amy Larn and Fiona Fennessy to break tackles and Dunne had the strength to cross on the left, flanker Amy Maguire converting for 12-7 in the 52nd minute.

Fennessy was finding space for North Midlands and South-East were narrowing their focus, going through Kavanagh and Isaac for a gain of ground.

The quick North Midlands backs sprung into action from Wilson’s chip, Larn and Fennessy almost working the overlap until Nixon conquered a ruck.

Four quick penalties conceded by the South East generated the momentum for lock Blathnaid Smith to carry through contact and for Nolan to cross on the right to salvage the game and, ultimately, the title in the last minute. 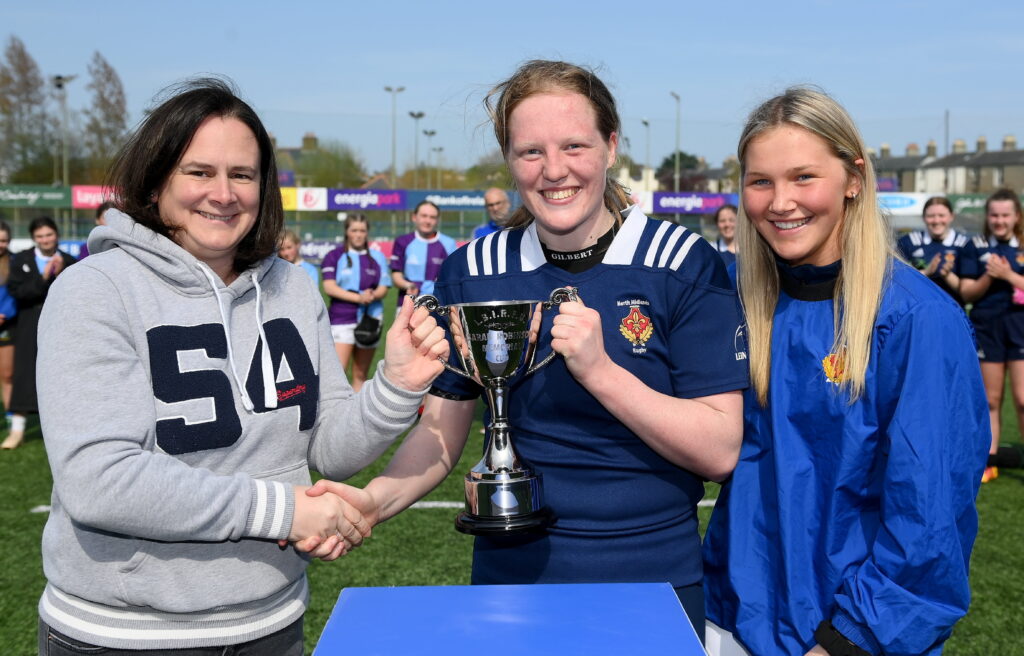 The North-East brought the Sarah Robinson Cup to an exciting conclusion in holding off Midlands at Energia Park.

There was give and take on both sides as Midlands pressed the action through full-back Sorcha Tierney and wing Sorcha Ryan, while prop Lauren Fitzpatrick’s physicality and Shannon Campbell’s exit kicking led North-East’s resistance.

They were even able to hold the ball up over their own line to earn a drop out. Alas, there was no escape from the pressure, No 8 Saoirse Guinan eventually powering to the whitewash for Abaigeal Connon to convert in the 16th minute.

Straight away, Midlands were on the hunt for more points, flanker Rosin Bennett fending off tacklers and Ryan cutting through the cover where Skye Healy made a textbook try-saving tackle.

No 8 Purcell kept pumping her legs through contact and  Fitzpatrick did the rest of the work for North-East to make it 7-5 on the stroke of half-time.

The impact of replacement Alma Atagamen was immediate, carrying through the gain line and following up the work of Galvin and Purcell with a burst to the line for a 10-7 lead in the 38th minute.

An agile takeaway by Naoise Smith was supplemented by Anna Hilliard’s speed, Atagamen’s power play and the finishing acceleration of Guirey for 15-7 in the 43rd minute.

Robyn O’Brien broke from the base of a ruck and Jodie Ahern picked up metres down the left for Midlands and hooker Kelly Burke bashed over from a tap-and-go penalty in the 56th minute.

The fluency of the North-East’s handling was proving difficult to contain as they came hard in search of the insurance score.

But, vital turnovers by Olivia Craig and Isobel Clerk gave Midlands a degree of hope they could turn the game on its head.

Burke was effective from another tap penalty to put them in position to strike in advance of a weaving carry by full-back Tierney.

But, Molly Coulter’s willingness to get on the ball and take it forward made a difference as North-East held on by the skin of their teeth.