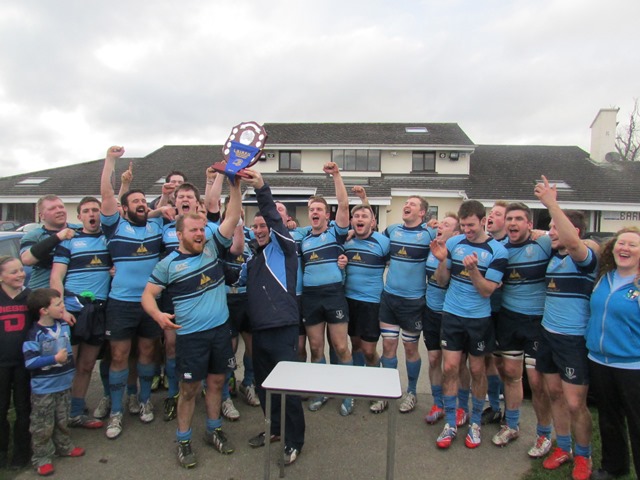 This was the 4th meeting between the 2 sides and the 2nd final after a dramatic win for the Premier B side over Naas only 4 weeks earlier to become Metro Div 2 Champions. The Blue Bulls were chomping at the bit for this game after early round defeats in the Metro Cup and Plate a few weeks earlier and were looking to finish the season on a high.

You couldn’t have asked for better Conditions in Parsonstown. The Pitch was in great shape and the Sun was shining, so it was gearing up for another epic battle between the two Kildare sides.
The Game kicked off as you would have expected with both sides gunning for early dominance and to take first blood on the score line.

The Blue Bulls started well with the likes of Centre pairing Mark Kenny and Dave Stewart testing the Naas Defence early on but it would take 15 minutes for the home side to break through when 2nd Centre Dave Stewart made a lovely break down the wing inside the Nass 22 and broke through to go over in the corner to take the opening try and with young Out half Robbie Mullen on hand to convert made the score line 7-0 to the home side after 15 minutes of play.

The Blue Bulls did not want to ease back and came tearing out of the gates after the restart with the likes of Front row pairing Ben Harrison and Peter Courtney smashing everything in their path to punch a hole through for their backs. The Blue Bulls did not have to wait long as the Pack continued to drive forward which in turn allowed Winger Dan Ryan go over for a fantastic try which Robbie Mullen was unlucky not to convert to make it NUIM Barnhall RFC 12-0 after 22 minutes.

Naas were trying to regroup to stop the Blue Bull onslaught but the Home side were now kicking into another gear as they went in search of another score. Naas did manage to break the Blue Bull line with a couple of beautiful line breaks but the Blue Bull defence stood strong to keep the visitors out.

The Naas Defence had stopped the Blue Bull Charge until the 32 minute when young No 8 Paul Nalty who was playing in his 2nd final of the season against Naas burst through the Visitors defence like a Bull in a china Shop and went over for they no 3 in the match and Paul’s 2nd try in two finals. Robbie Mullen stepped up once again and converted to make it NUIM Barnhall RFC 22-0 after 32 minutes after Robbie had converted a forced penalty only moments before.

The Ball had just been kicked off for the restart when the Blue Bulls went on the charge again this time it was Barnahll Legend Peter Courtney who thundered over the line after a great drive by the pack. Robbie Mullen once again added the extra points to make 29-0 after 36 minutes. It seemed like this would be it for the 1st half but Winger Dan Ryan had other ideas as he took a great ball from his backs to break the Naas Hearts once again to go over for his second try of the game and with the conversion missed took the score line to 34-0 at the break.

The Blue Bulls knew that Naas would throw everything they had at the home side in the 2nd half to decrease the lead the Blue Bulls had built and the Visitors were true to their word as Naas really took the game to NUIM Barnhall with ferocious tackling by the Cobra’s which forced the Blue Bulls to knock on a couple of times. This allowed Naas to counter attack and test the Blue Bull defence again and again.

The Home side had to dig deep to stop the Powerful Naas Pack from breaking through. Coach David Kirk decided to make some changes to refresh the Blue Bull 15. One of the fresh blood Blue Bulls to march onto the field was Rob Troy who had been great in the earlier stages of the competition and was now needed to stop the Naas charge. Only on the field a few minutes and with the help of the Blue Bull Pack who managed to turn over the ball, This Gave Rob Troy his chance and took it he did with a lovely inside line break to burst straight through 2 tackles and over the line and with the conversion secured extended the home sides lead even further to 41-0 after 65 minutes.

It looked like game over at this stage but Naas continued to show great pride and battled hard against the home side to try and bring the score line down before the final whistle.  It was turning into a real battle of wits in the closing stages of the game as the Blue Bulls tired to kill off the game and keep Naas out their half. Just as the visitors started to drive the home side back and looked like another well worked Naas line break was on, in stepped Centre Mark Kenny to turn over the ball and a steal a try under the posts. With another conversion secured made the score line now NUIM Barnhall RFC 48-0 Naas RFC after 74 minutes.

That was it for the Shield final and another win for the Premier a Blue Bulls.

A great way to end a wonderful season for the boys and another great day for Kildare Rugby.