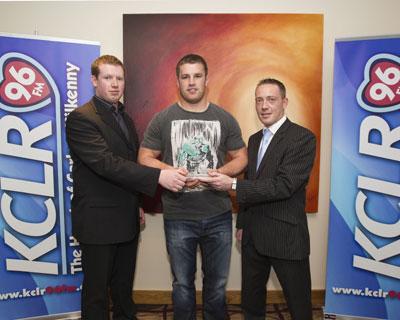 Leinster back-row forward Sean O’Brien from Ardristan, Tullow, Co. Carlow has been awarded the Talbot Hotel and KCLR96FM “Sporting Hero” award for May 2011…

Sean was at the forefront of Leinster’s Heineken Cup campaign which resulted in the team lifting the trophy for the second time in three years on the 21st of May. His performances in the tournament also seen him being recognised as the top player in Europe picking up the ERC European Player of the Year Award.
He also featured heavily in the Magners League campaign receiving a number of man of the match awards and won a number of caps for the Ireland team during the Six Nations.
Although Sean has been in the rugby spotlight over the past season, he has maintained a firm grasp of his roots, spending his spare time helping out with teams and fundraising events at Tullow Rugby Club. He is regularly seen at the Black Gates helping out with everything from minis blitz’s to the J1’s campaign in the Leinster League and Newstalk Towns Cup competitions.
He is also involved with the Fighting Cocks GAA Club. By doing this he epitomises the spirit of the “Sporting Heroes” awards and has been deemed May’s winner.
Background:
The Talbot Hotel and KCLR96FM “Sporting Hero” is amonthly awards scheme which was launched in March 2011. It looks to recognise people from all sporting backgrounds in Carlow. People can nominate their hero, which can be a team, player, manager, volunteer or supporter by logging onto kclr96fm.com and clicking on the Sporting Hero link. At the end of each month, a judging panel will pick the winner from the nominations and the winner gets a reception at the Talbot Hotel and a specially made Glass trophy.