O’Brien named Bank of Ireland December Player of the Month… 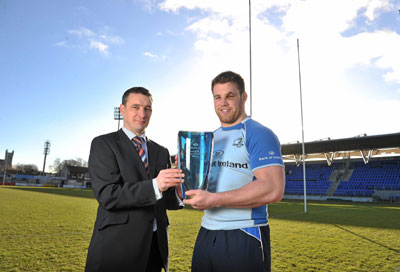 Sean O’Brien has been named the Bank of Ireland Player of the Month for December and the Tullow man was presented with the award by Fergus Hickey (Business Adviser, Bank of Ireland) in Donnybrook …

Sean received the most December votes from Leinster supporters who referenced his inspirational form against Scarlets at the beginning of the month, his try making performance in the ‘Fever in the Aviva’ against French side Clermont and the interprovincial derby with Ulster when he scored two tries, his first efforts in the Magners League this season.

Commenting on his award, Sean O’Brien reflected on the month’s games and on own his development in the Leinster Academy before turning his attention to Saturday’s game against Saracens.

Voting is open for the January Bank of Ireland Leinster Rugby Player of the Month. To nominate a player from any or all of the games this month simply e-mail information@leinsterrugby.ie telling us which player you want to vote for and why. Everyone who nominates a player is in with a chance to win a gift voucher.