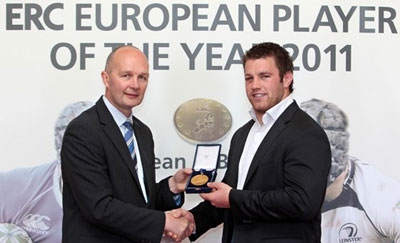 The award crowns a magnificent season for the Leinster back row player, who started every one of the Irish province’s nine games as they carried off the Heineken Cup for the second time in three years.

This weekend O’Brien, who also played throughout Ireland’s RBS 6 Nations campaign this year, and his Leinster team mates will be hoping to double up by becoming only the fourth club to win a domestic league and Heineken Cup double when they meet Munster in the Magners League Grand Final at Thomond Park.

O’Brien was presented with his award, a specially struck gold medal, by ERC chief executive Derek McGrath at a ceremony at the player’s home ground, the RDS.

“Sean was an inspirational character at the heart of the Leinster pack in their victorious Heineken Cup season and proved himself to be a major force both as a ball carrier and defender,” said McGrath.

“He played across the back row, scored vital tries and picked up three Heineken Man of the Match awards. His power, athleticism and consistency over the course of the Heineken Cup made him an excellent choice for the ERC European Player of the Year Award.”

In 2010 ERC, the governing body of Europe’s two club rugby tournaments, launched the highly acclaimed ERC15 Awards, recognising the efforts of a number of outstanding contributors to the first decade and a half of European competition. The inaugural recipient of theERC European Player Award, as the best player over the first 15 years of these tournaments, was Munster’s Ronan O’Gara.

For the 2010/11 season ERC opted to present one award to recognise the best player of the season from both of its tournaments – the Heineken Cup and Amlin Challenge Cup – selected by a panel of five experts.

After studying the performances of players from the 24 Heineken Cup and 20 Amlin Challenge Cup teams in this season’s campaign the Selection Panel presented a five man shortlist to ERC:

The shortlist was also presented to the 44 clubs and their recommendations were factored into the deliberations of the Selection Panel which reconvened in Cardiff, host city for the two European finals, to complete the selection process. The winner was confirmed after all five shortlisted candidates had been seen in action in the two finals.

“It’s been a fantastic year for me, and more importantly for Leinster,” said O’Brien. “It’s great to be presented with an award like this, but it has more to do with the team than it has to do with me. Hopefully, this is only the start rather than the end of our success in Europe, and of course, we’ve got another trophy to aim at this weekend.”