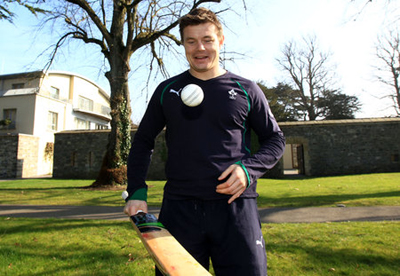 He spoke whilst recording a good will message for Cricket Ireland TV to be sent out to the Irish squad in India.

“Huge congratulations to you all from everyone in the Irish set up here,” he said. Whilst admitting he wasn’t the biggest cricket ‘buff’, he spoke passionately of the support that the whole Ireland rugby squad was sending to Ireland’s Cricketers.

“When you see the Irish team doing well like you guys did (this week) it doesn’t matter what the sport is. It was compelling viewing against the English. I was stuck to my seat here as most of the squad were. To beat the team that made the game makes it all the more sweeter,” O’Driscoll said.

Let’s hope that everyone connected with Irish sport can continue the feel good stories from this week and Brian and all the lads will repeat the performances of the cricketers when Ireland play England on March 19th at Aviva Stadium in Dublin.

For more information and to see Brian’s video CLICK HERE