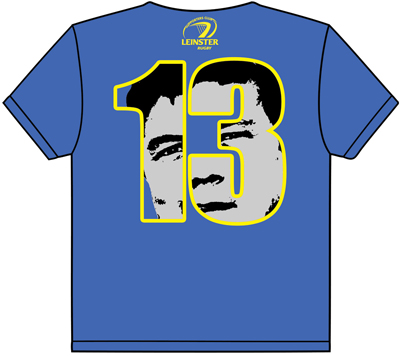 Six years after it was first released, The Official Leinster Supporters Club (OLSC) is bringing out a special edition of the Triskaidekaphobia T-shirt to commemorate Brian O’Driscoll’s Leinster career…

Triskaidekaphobia is a morbid fear of the number 13. A phenomenon that for one reason is found more commonly in professional rugby than in everyday life: that reason is Brian O’Driscoll.

Throughout his professional career, Brian O’Driscoll has been synonymous with the number 13. Whether it has been for the Lions, Ireland or Leinster, Brian has inspired fear and respect in the opposition as one of the best centres in world rugby.

The T-shirt features the words ‘Causing Triskaidekaphobia 1999-2014’ across the front and the number 13 on the back with an image of Brian’s face behind it. The Club was flattered that when Brian joined Twitter it was this image he chose as his avatar and more than 400,000 followers later he still uses it.

Like all of our ‘Legend Series T-shirts’, these are limited edition, when they are all gone, they are gone!

To order, supporters should make payment via Paypal to olsc@leinsterrugby.ie with your name, address and size details.

For multiple orders please email us for a reduced postage quote.

Pre orders close at 9pm on St Patricks Day. There will be a very limited supply for walk-up sales in the Laighin Out bar at the Treviso game on Friday 18 April 2014.

The OLSC would like to thank former committee member Dave Cahill for designing the original and this updated version of the T-shirt. We would also like to thank Brian O’Driscoll for granting permission to produce this edition of the shirt.