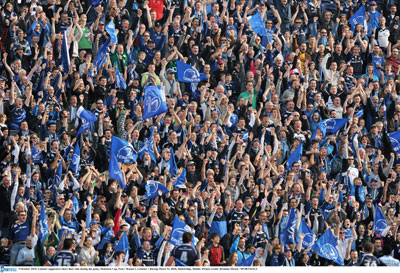 The IRFU are happy to announce three significant new Ireland international contracts with the news that Ireland Captain Brian O’Driscoll and fellow Ireland and Leinster team mates Jamie Heaslip and Jonathan Sexton have all agreed new contracts to remain playing in Ireland….

Brian O’Driscoll will continue a career that began in Ireland in 1999 by remaining to play with Leinster until the end of the 2012-13 season. Sexton will also remain in Ireland with Leinster having agreed a new contract up until June 2013 with Heaslip, who has played No.8 for Ireland, Leinster and the British & Irish Lions in his career to date, now contracted up until June 2014.

Brian O’Driscoll commented: “Playing in Ireland with Leinster for my entire career has been all the more enjoyable knowing that my rugby goals I have achieved to date were with an organisation that has really grown at the same time as me over the last ten years. Leinster and Irish Rugby has progressed so far during that time that winning Magners Leagues, Heineken Cups and Grand Slams was infinitely more satisfying knowing that it was done playing in Ireland with my home province.”

“I also feel that my potential to reach those goals was best served by staying in Ireland where as players, we are so well looked after and I think it has enhanced and prolonged my career and is something that the younger players can really benefit from. My appetite to achieve more with Leinster and Ireland certainly has not been dampened by our recent success. While I have been in Leinster over 11 years, it is great to see the next generation coming through and I am a little jealous as they have the chance to experience even more success then I have had. I am looking forward to the start of the 6 Nations, and after that I can focus on those other long term goals with Ireland and Leinster over the next two years.”

Jamie Heaslip said: “I am pleased to have agreed a new contract and to commit myself to Leinster for a further 3 years. I have been fortunate to enjoy some great success already in my career and I want to achieve more with Leinster and Ireland in the years ahead. There is tremendous competition for places at both provincial and national level which augurs well for the future. Now that I am going to be part of that I just want to concentrate on getting over my injury and getting back on the pitch for Ireland as soon as possible.”

Jonathan Sexton commented: “There is something special building in Leinster at the moment and as well as the involvement with Ireland in a World Cup year, that was the main influence on my decision. It has been great to get my contract finalised ahead of what is going to be a pretty exciting and challenging period for the Ireland squad and now I just want to focus on playing the best rugby that I can and hopefully contributing to further success with Ireland and Leinster.”

Leinster Coach Joe Schmidt added: “It’s a great boost to finally secure the contract extensions of Brian, Jamie and Johnny. They have been key players in the province’s recent success and they offer genuine leadership, talent and experience as we strive toward further success. Being of genuine Leinster stock it’s great to have three such pivotal players join with a number of other players who have recently extended their contracts, reaffirming that loyalty amongst Irish players can still outweigh lucrative overseas offers. For the province, our sponsors and supporters it offers great stability going forward.”

IRFU Chief Executive Philip Browne said: “This is exceptionally good news for Ireland and Leinster to be making the announcement that Brian, Jamie and Jonathan have agreed new contracts to continue to play here in Ireland. I believe that they have made the right choice for everybody concerned and would like to express my delight at each of them for making this commitment. They have shown that their desire to continue their careers in Ireland and play for Leinster was the strongest factor in making their decision.

“While being equally delighted at both Jamie and Jonathan’s decision to sign new contracts, I feel I do need to make a special mention about Brian O’Driscoll. He has shown unwavering professionalism and commitment to Irish and Leinster Rugby throughout his career and is also the perfect example to all young players, showing how the Irish system provides support for natural talent and can have a positive influence on their development and potential by remaining playing here in Ireland.”

Ireland Coach Declan Kidney said: “I think that Brian, Jamie and Jonathan agreeing new contracts is great news as all three players have key roles to play for province and country. The benefit to the Irish team to have these players remaining here in Ireland cannot be understated and I am delighted to see that they have made this commitment.”