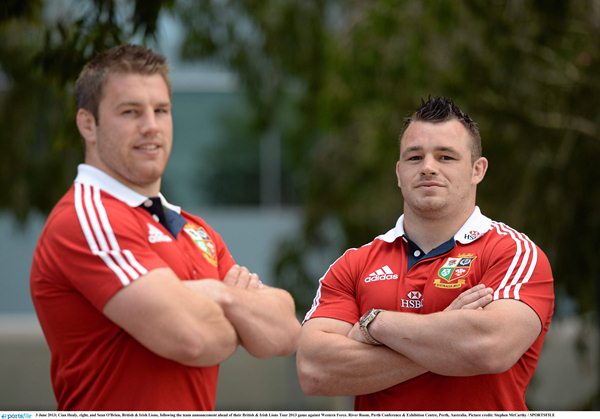 Brian O’Driscoll will captain the British & Irish Lions against Western Force on Wednesday (KO: 11am Irish time) but his fellow Leinster colleague Rob Kearney has emerged as an early tour injury concern with a hamstring problem…

In all there are 5 Leinster players in the starting line-up including tour debutants Cian Healy, Sean O’Brien and Jonathan Sexton who featured in the victory over the Barbarians in Hong Kong on Saturday.

Lions head coach Warren Gatland, however, is planning to keep a close eye on Kearney’s progress.

Gatland said: ‘He is a little bit of a concern for us at the moment, to be honest.

‘He’s got a grade one tear and we are going to see how he responds, so we’ve got to be potentially prepared that that hamstring might not heal as quickly as we would like.

‘We want to give him some time. We scanned him in Hong Kong, it came back as a grade one tear and the medics have put in a plan for the next week or so.

‘We feel like we’ve got cover at the moment with Leigh Halfpenny and Stuart Hogg, and obviously Sean Maitland has played quite a lot at full-back as well.

‘We will see how Rob progresses. There have been some markers put in place. If we can hit those in the right timescale we can hopefully bring him back. But it looks a little bit concerning at this stage.’

As expected, there are 15 changes from the side that crushed the Barbarians 59-8 in hot and humid Hong Kong two days ago, with Halfpenny, wing Tommy Bowe, centre Manu Tuilagi, hooker Rory Best and flanker Tom Croft among those who make their first tour starts.

Four of the side that started at Hong Kong Stadium – prop Mako Vunipola, number eight Toby Faletau, fly-half Owen Farrell and wing Sean Maitland – are on bench duty this time around.

Tour skipper Sam Warburton is kept waiting for his first appearance after careful management of a knee injury, but that moment looks set to arrive against Queensland Reds in Brisbane next Saturday.

Commenting on his first Lions tour to Australia O’Driscoll said: ‘Yes, it was a fantastic feeling. I was a young guy just starting out on my career. It was all very new to me.

‘I suppose I was just trying to go with the flow and feel my way into things, and pulling on the jersey for the first time was a very, very special moment and something I will always remember.

‘But it is one thing pulling the jersey on, it’s another thing winning with the Lions, and that is the mentality we’ve got across the squad.

‘It is very exciting. I haven’t lost any of the buzz for the feeling of being involved with the British and Irish Lions. It is a very, very special place to be.

‘Now that we’ve finally arrived in Australia the tour kind of feels it has truly begun now we have landed on Australian soil.

‘We were pleased with how we started (against the Barbarians) but we’ve got to continue building, working hard at training and when we get to games trying to build a bit of a ruthlessness about our mentality and our performance.’