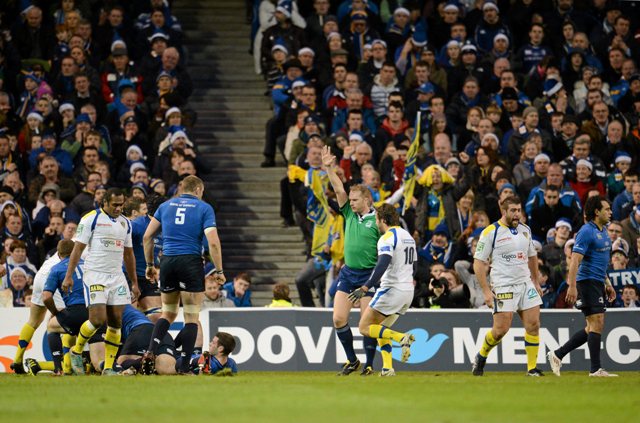 Leinster’s match against reigning Heineken Cup champions Toulon at Stade Felix Mayol will be refereed by Wayne Barnes from England.

The last Leinster match refereed by Barnes was the 19-9 win over Ospreys in the Liberty Stadium in Round 1 of the Heineken Cup back in October.

Nigel Owens will get next month’s much-anticipated Heineken Cup quarter-finals underway when he takes charge of the April 5 clash between Munster and Toulouse.

The game marks the first visit of the four-time champions to the famed Thomond Park cauldron.

Ireland’s Alain Rolland, who recently refereed his 66th and final Test match, has been appointed to referee the Anglo-French confrontation at Stade Marcel-Michelin between last season’s runners-ups Clermont Auvergne and Leicester Tigers. He will lead an all-Irish match official team.

French referee Jerome Garces will be in the middle for Ulster’s showdown with Saracens at Ravenhill.