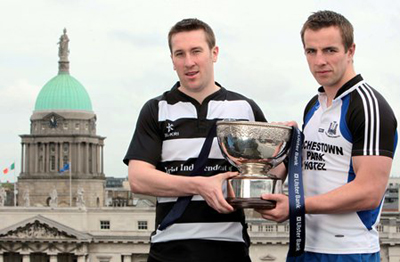 If Old Belvedere are looking for some encouragement going into Sunday’s Ulster Bank League final against the holders Cork Constitution at Donnybrook (KO: 2.35pm, LIVE RTE 2) they might reflect on their first meeting this season, back in October…

They lost 12-9, but the winning points for Cork Constitution, a 50 metres drop goal from full-back Sean Scanlon, only came in injury time. Otherwise, there was nothing between the sides.

Not so on their second league meeting at the end of January when Cork Constitution recorded a comfortable 23-12 success, outscoring Old Belvedere by three tries to one. It was a victory which proved important in Cork Constitution going on to top the Division 1A table.

It’s perhaps fitting that the two top sides in the table will contest the final, although Old Belvedere could count themselves very fortunate to have beaten Division 1B winners Clontarf 22-20 in the semi-final with a late Eddie Devitt try.

Quite clearly, they are going to have to play a lot better in the final. Much will depend on their ability to cope with the strong Cork Con pack, and provide their powerful No 8 Leo Auva’a with a platform.

Behind the scrum, Old Belvedere have some real scoring ability, mainly in the shape of Danny Riordan at full-back. Scrum-half Simon Keogh is further big influence, as is another former Leinster player Andrew Dunne. Though Conal Keane started the semi-final at out-half, Dunne came on to make a big impact.

Cork Constitution were more impressive in beating Young Munster 19-9 their semi-final, although it was hard work against a Young Munster outfit that defended in heroic fashion. That said, Cork Constitution have consitently shown themselves to be the best equipped team in the league. Gerry Hurley has proved a big success, both as a goalkicker and a scrum-half general.

There are few, if any, weaknessess in this Cork Con team, many of whom have represented Munster this season. From Denis Fogarty in the front-row, Ian Nagle in the second-row and Billy Holland and skipper Frank Cogan in the back-row, their pack is full of quality.

They also have plenty of ability in a back division which will see Scott Deasy partner Hurley at half-back, and Simon Zebo returning on the left-wing. Zebo missed out on the semi-final because of Munster commitments but in the previous two league games he showed his value to Cork Con by scoring three tries. Full-back Scanlon is another strong runner, while the experienced Richie Lane is on the other wing.

Overall, Cork Constitution look to have the stronger set-up. And importantly, their coach Brian Walsh is fully aware that Old Belvedere will not play as poorly as they did in the semi-final.

If they are to win, Old Belvedere will, almost certainly, have to produce their best display of the season. Coach Phil Werahiko is checking on injuries to wing Dave Mongan (back) and Keogh (knee) before finalising his starting line-up.

Werahiko anticipates a big improvement from the semi-final, stating: “We can’t wait for Cork Con to make mistakes, because they don’t make them. It’s up to us to be a lot more positive. If we go out with the right approach then I believe we are definitely in with a chance.”