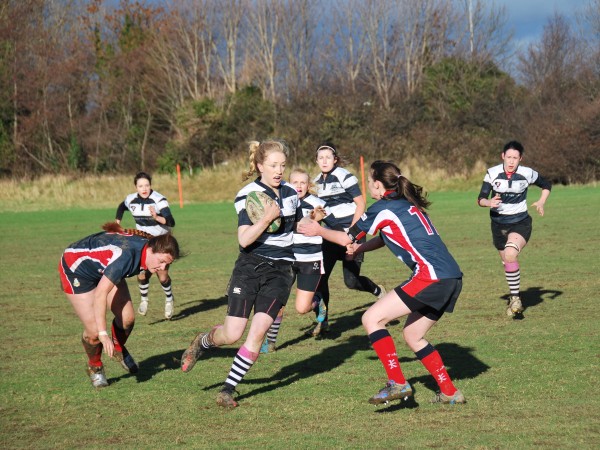 After a delayed start, the semi-final between Tallaght and Belvedere started with both sides showing lots of enthusiasm. Weather conditions were excellent with barely a breeze and no rain.

Tallaght kicked off and straight away Belvedere were pushing forward good powerful running. The first score of the game came when a Belvedere line-out resul;ted in the ball being worked out to Aine McKenna who put put Belvedere 5-0 in front. The try was dutifully converted by winger Amy O’Connor.

Later in the first half Belvedere powered over to win a Tallaght scrum. Quick hands from scrum-half Liz Nash out to the backs allowed full back Raffaela Pluger to fly over the try line. The conversion followed and scoreline was 14-0 in Belvedere’s favour.

After some good pressure from Tallaght their tight head prop Niamh Herrity found a gap in Belvedere’s defensive line and scored Tallaght’s first points of the day with a well taken try. This made the half-time score 14-5.

In the second half Belvedere raised their game and brought on substitutes that added an injection of pace, which helped them to put four more tries on the board. The tries were scored by Liz Nash, Alannah Fowley, Kate Foley and a second on the day for Aine McKenna. Winger Amy O’Connor had a 100% record on the conversions leaving the final score 42-5 for Old Belvedere.

Belvedere now have two teams in the Leinster Finals Day in Edenderry on the 25th January; their J1 team v Clondalkin and J2 team v CYM. It promises to be a great day out for all.