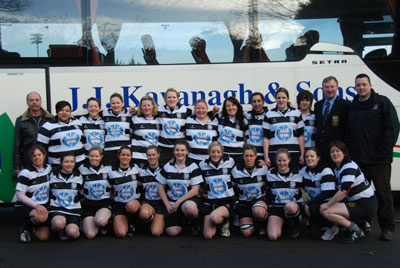 J. J. Kavanagh coaches of Urlingford, Co. Kilkenny provide transport for all OBRFC sides who travel to away fixtures across the Country.

Gerhard Mayhuber, Transport Manager J. J. Kavanagh & Sons said that his Company were delighted to support the Ladies side and wished them continued success for the future.

Old Belvedere President David Hargadan thanked the new sponsor and spoke of the importance of sponsorship in promoting the game of rugby. Old Belvedere Ladies Rugby started in 1994, and they now have 30 players in the squad.

Players have been attracted to Belvo from all over the country and there is a very strong International dimension to the membership with members from France, Canada, England, United States and Brazil turning out weekly to represent the Club in all competitions.

The side is currently at the top of Division 2 and recorded an impressive win last Sunday, defeating Belfast Harlequins 66-0. Clearly promotion to Division 1 is in sight. Coach Alan Kennedy and Captain Fionnuala Gleeson are sharply focused on reaching the top flight next year.

A tour to Stockholm is planned for the end of the season and would be a fitting way to celebrate promotion to Division 1.

New members are welcome at Anglesea Road, with training taking place each Tuesday and Thursday between the hours of 7-9pm.