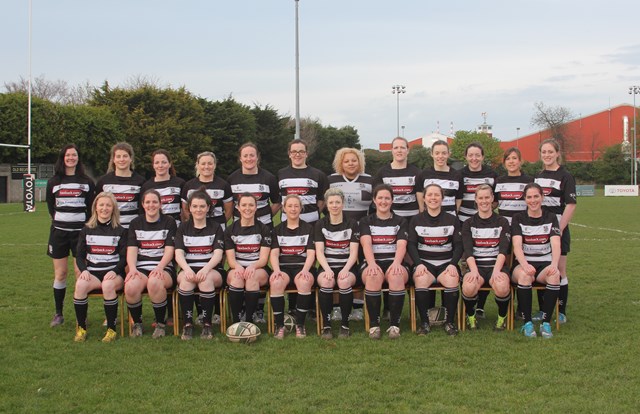 All roads head to Naas RFC tomorrow as Old Belvedere take on Highfield at 3.30pm whilst Blackrock College and UL Bohs battle it out for third place at 12pm.

The Old Belvedere Ladies 1st XV finally avenged their agonising one point defeat to UL Bohs in Annacotty last season and are now only one match away from their goal of being crowned All Ireland champions 2013-14, after a gritty and hard fought win over UL Bohs.

Ul Bohs fielded a quartet of internationals including Irish Captain Fiona Coughlan, Prop Fiona Hayes, out half Niamh Briggs and outside centre Niamh Kavanagh, and with the vastly experienced flanker Jennifer O’Leary.  Bohs came to town with internationals and experience a plenty in defence of their AIL Crown which the Limerick side would not be relinquishing without a good fight.

Playing into the Anglesea road end of the grounds and against a strong downfield wind the hosts applied early pressure with a strong scrum early doors shunting the visitors back . However this did not last. A feature of the early exchanges was the battle of the out halves where Old Belvederes Nora Stapleton and Bohs Niamh Briggs were both vying for field position with testing kicks and touch finders. On 14 mins after an Old Belvedere knock on at a line out far side close in, off the resulting Bohs scrum Bohs Niamh Briggs, typically, launched a booming touch finder to relieve the early pressure on her line.

On 19 mins Old Belvedere number 8 Sharon Lynch stole a Bohs line and carried well infield where Old Belvedere won a penalty at the ensuing breakdown. From some 20 meters out to the right of the posts Nora Stapleton kicked the hosts ahead 3 nil.

On 22 mins ,a superb break from Old Belvederes Elise O’Byrne White saw the Centre tear into the Bohs half at pace before cutting back inside on an arcing run deep into Bohs territory only to get hauled down some 20 meters out and penalised at the ensuing ruck ! On 24 mins and benefitting with good field position from the Centres break, Old Belvederes Nora Stapleton from 35 meters out launched a testing punt deep into the Bohs red zone right hand corner where Ul Bohs full back Hanna Davey watched on as the ball bounced backwards and into the grateful arms of centre Jenny Murphy who ran in and under the sticks for the opening and only try of the game. Nora Stapleton kicked the conversion from underneath the posts to extend the home lead to 10-3.

UL Bohs enjoyed a sustained period of pressure in the Old Belvedere 22 towards the end of the first half, and, off a line out take and drive on the far side close in they recycled and attacked the Old Belvedere try line running from left to right where right wing Aisling Hutchins was almost over in the right hand corner but for a handling error and good scramble defence from the hosts. However, they did convert the territory and possession, with a delightful drop goal some 30 meters out from Niamh Briggs to bring the half time score to 10-3.

UL Bohs began the second half well and enjoyed sustained attacks in the Old Belvedere red zone in the first ten minutes of the half. On 46 mins, after centre Niamh Kavanagh won her side a penalty after a foray into the Old Belvedere half, a quick tap and go from Niamh Briggs on the far side some 20 meters out almost brought a try in the right corner but for some determined defence from Old Belvedere. Old Belvederes full back, Emer Mc Elhinney, paid the price for defensive duties at close quarters and was handed a yellow card on 47 mins. A monster Nora Stapleton tackle and turnover on 48 mins, complimented by a Jenny Murphy kick to touch allowed Old Belvedere clear their lines.

There then followed searing individual breaks from both sides , firstly the irrepressible Old Belvedere tight head Prop Ailis Egan raced screaming clear and deep into the Bohs half on 50 mins and with the try line in sight….. She was hauled down! Then the hugely influential Bohs Centre Niamh Kavanagh raced clear into the Old Belvedere half with a tremendous break and from the resulting attack a penalty was won on 53 mins which Niamh Briggs converted to bring it back to 10-6.

On 73 mins after a period of good pack pressure in the Bohs half, Bohs were penalised for not rolling away and Nora Stapleton split the uprights from the 22 meter line to extend the hosts lead to 13-6 which is what the score board read when referee Helen O’Reilly blew full time on this compelling AIL semi-final watched by an enthusiastic crowd.