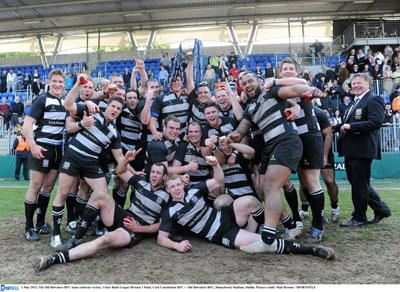 Congratulations to Old Belvedere who secured the Ulster Bank League Division 1 trophy for the first time in their history, beating last year’s champions Cork Constitution 20-17 in a gripping final at Donnybrook on Sunday…

Cork Constitution were outscored by three tries to one as Old Belvedere, who came up from Division 1B last season, became the first Leinster winners of the league title since St. Mary’s College in 2000.

David Mongan’s eighth-minute try electrified an entertaining first half, but penalties from Gerry Hurley after 11, 20 and 36 minutes gave Cork Con a 9-7 interval lead.

Brian Walsh’s men had the better of both possession and territory in the opening 40 minutes, yet Old Belvedere, who had Stewart Maguire yellow carded, foiled their try-scoring attempts.

The sides swapped unconverted tries through John Kennedy and Sean Scanlon, the latter score putting Cork Con 14-12 in front in the 58th minute.

But replacement out-half Conal Keane nudged Old Belvedere back ahead and a second try of the day from RTE/Ulster Bank man-of-the-match Kennedy was enough to seal a memorable win.

Having topped the table once again, Constitution were quietly confident of defending their crown. When the two sides met in the league phase, the defending champions were victors both home and away.

The blue riband event of the Ulster Bank League brought a good-size crowd to Donnybrook, with Declan Kidney, Les Kiss, Gert Smal, Joe Schmidt and Isa Nacewa amongst the spectators.

‘Belvo had the breeze at their backs in the opening half and made a purposeful start with their backs and forwards combining well.

Their player-coach and captain Andy Dunne missed his first penalty chance and Cork Con mounted a strong response, with prop Stephen Archer popping up in a powerful drive.

Phil Werahiko’s charges then upped the ante with a terrific try from long range.

Dunne and centres Ben Woods and Kennedy unleashed full-back Daniel Riordan near halfway and he sped away before drawing the cover to send winger Mongan over in the left corner.

Dunne added the extras with aplomb, before an offside decision from the restart allowed Hurley register Constitution’s first points with a precise penalty.

Walsh’s side dominated the next few phases with Munster’s Scott Deasy and Denis Fogarty both brought to ground just metres from the ‘Belvo try-line.

Cork Con won a penalty from the resulting scrum, and Hurley did the necessary from point blank range to make it 7-6 by the midpoint of the half.

A nippy counter attack from Simon Zebo, who got by Kennedy, gave the Leesiders a promising position and a raid out to the right saw Ivan Dineen and Richie Lane gain good ground.

Some committed tackling from ‘Belvo grounded Brendan Cuttriss in front of the posts and when Billy Holland went straight in off his feet, the Dublin outfit got a chance to relieve the pressure.

Archer and Ian Nagle, who put in some thunderous tackles, were both prominent in the loose for Constitution who forced the issue coming up to the half hour.

A kickable penalty was turned down and it took a crucial turnover from Jason Risdon to keep Cork Con out, five metres from the ‘Belvo whitewash.

Shortly afterwards, big prop Maguire was sin-binned for not rolling away after tackling Fogarty and ‘Belvo had a let-off when Hurley missed the resulting right-sided penalty from outside the 22.

Another elusive run from Zebo, who wormed past Riordan and beat off Chris Keane’s attempted tackle, saw Constitution pile into the 22 again, and Lane’s deft pass had Scanlon in sight of the line.

14-man ‘Belvo regrouped though, and some gritty defence forced a handling error from Cork Con prop Martin Gately a couple of metres out. Hurley gained some consolation with his third penalty success.

The second half started at breakneck speed, ‘Belvo setting the tone with an early try from Kennedy.

It all started with a lovely one-two between Eddie Devitt and Riordan. The full-back was hauled down by Zebo before the try-line, but Kennedy, with support from Leo Auva’a, was able to force his way over from close range.

‘Belvo were upping it in the physical stakes, Woods tackling feverishly in midfield and good foraging from Auva’a and Jonathan Slattery set up a penalty which Dunne missed.

As the game ebbed and flowed, Deasy’s chip and chase sent Cork Con flooding forward and lock Brian Hayes was just held up over the line.

Constitution were patient though and from a ruck inside the ‘Belvo 22, they worked an overlap on the right where Deasy put full-back Scanlon over past Devitt.

Hurley could not add the conversion from wide out and just five minutes later, Dunne’s replacement Conal Keane landed a penalty after watching his drop goal attempt come back off the woodwork.

The action was fast and furious and with the warm weather having an impact, both coaches looked to their benches. In the 69th minute, ‘Belvo struck for their third and most important try of the afternoon.

Running from the ten-metre line, the impressive Woods barrelled forward, fending off Deasy and passing for Kennedy to evade the cover and touch down in the right corner. Keane’s conversion attempt bounced back off the right hand post, but ‘Belvo were good value for a hard-earned 20-14 lead.

However, they infringed from the restart and Hurley kept Constitution very much in the hunt with a well-hit penalty from the right. With eight minutes remaining, the difference was just three points.

Gaps were opening up all over the pitch and an inspirational counter attack from Auva’a drew loud roars from the stand. The big number 8 was eventually brought down by Hurley, with replacement Peter O’Mahony snaffling turnover ball.

Cork Con got their chance to level the game in the 77th minute when ‘Belvo replacement Kevin Buckley went off his feet at a ruck. But the usually reliable Hurley pulled his kick to the left and wide.

The Old Belvedere forwards knuckled down and commanded possession for a short while, frustrating Cork Con. When they got it back, the table toppers were out of scoring range and running out of time.

In the dying seconds, Constitution were stretched when Mongan kicked through and Devitt got to the ball ahead of Nagle, who tracked back brilliantly. From the ensuing ruck, Zebo was caught offside and promptly dispatched to the sin-bin.

With the win in the bag, Keane launched his penalty kick straight into the Bective end of the stadium and the celebrations could begin.