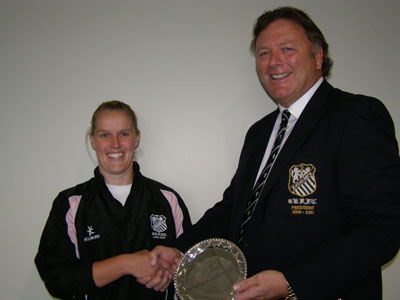 The ladies were able enter two strong teams into the competition of twelve. Both teams were victorious on day one of the competition racking up three wins and a draw between them. The second day brought more of a challenge and each team suffered defeat during their first matches.

When the second round of playoffs was announced, Belvo One and Belvo Two were disappointed to learn that they would be playing one another. Making the best of a tough situation, they infused the 20 minute match with fun and playful sportsmanship. Though only one team would go through to the plate competition, both would share in the fun spirit of the tournament.

The prevailing team went on to face a tough Swedish squad. Next came all hard running, evasive moves, great tackles, solid scrums, and precise line outs. At the end of two challenging halves the opposition was scoreless. The Belvo ladies, for the second time this year, came out on top by 24 points up and proudly came home with another piece of silverware for the club.

The ladies raised funds throughout the year for their international tour and used the opportunity to kick off a new season. Belvo came on top of the All Ireland IRFU Division 2 League last season and are now promoted to Division 1. With a gruelling season ahead, they continue to train hard and play hard together.