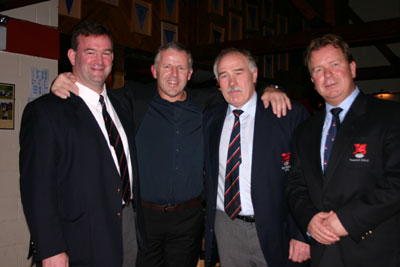 Club President Niall Dineen opened the evening by welcoming the guests and proposing a toast to Ireland.

After dinner Senior Deputy President Ivan White proposed a toast to the IRFU which was replied to by Phil Orr, who wore both his club and IRFU hats on the night ! Paul Short, in proposing a toast to the guests, included some of his famous Bill McLaren impressions.

The highlight of the evening was undoubtedly the reply on behalf of the guests by New Zealand rugby legend Sean Fitzpatrick who gave a highly interesting insight into what it was like to grow up in such a “rugby mad” country and to play for the All Blacks.

Corkonian Niall Dineen brought the formalities of the evening to a close by presenting a hurley to Sean whose grandfather hailed from the Thurles area, a fitting gift for one who was very much up to speed with the fortunes of the Tipperary hurlers last year and this year!

The more social part of the evening followed and continued into the small hours.