OLSC: “Back the Boys By Wearing Blue”… 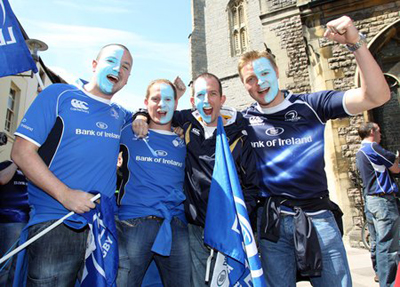 As the team prepares itself for one final challenge for the Magners League Grand Final, supporters are also preparing for one more momentous occasion…

Whether you are lucky enough to have a ticket or not, every supporter counts. The team need your support for this final challenge, so do anything you can to make your personal support count and “pull on the jersey” alongside the players.

We want every man woman and child to wear BLUE this Saturday – regardless of it being Leinster gear or not, so beg, borrow or buy!

Official Car Supplier to Leinster Rugby, Volkswagen, is also distributing blue car flags this week for anyone making the journey south. Drop into Ballsbridge Motors with your match ticket to grab one, although hurry, as there is a limited number and they will be given out on a first come first served basis.

A NOTE FROM THE OLSC…

It’s the final hurdle; the last match of the season is upon us and there is a trophy at stake. Last weekend was an amazing occasion for many reasons but the team and supporters alike must park it and treat this weekend as the cup final it is.

Munster, both team and supporters, will be doing everything within their power to take the win, with the added incentive, should it be needed, of being the first team to beat the newly crowned European champions.

If you are one of the 6,500 travelling to Thomond Park make sure you bring your ‘A game’ in terms of support. If you are on the terraces please make an extra effort to get to the ground early to take up position.

Look for other Leinster supporters and congregate together if possible. Let’s make some serious noise and get behind the boys as they fight for silverware and attempt to take an historic double of European and domestic tournaments. Wear your bluest blues, bring a flag and shout your socks off. Give it everything you have and then some.