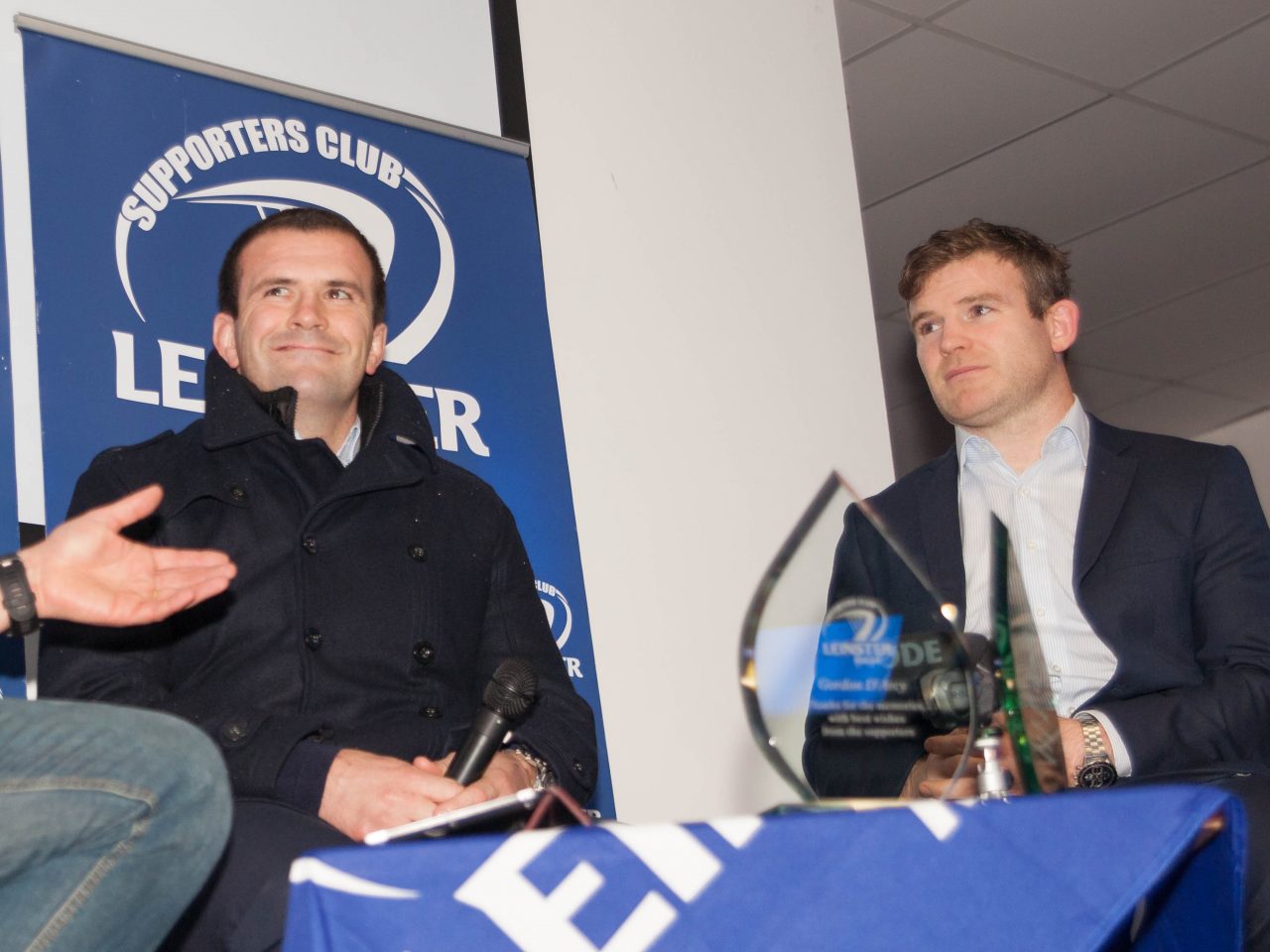 A large group of supporters gathered in the Laighin Out Bar following Leinster’s victory over Treviso to bid adieu to two stalwart servants of Leinster Rugby, Shane Jennings and Gordon D’Arcy…

On the night, former OLSC president, Killian Byrne interviewed both players. He commenced proceedings by listing the honours garnered by the players, a list which included almost every medal and tour invite to be won in the northern hemisphere.

When asked to throw his eye back over the season and his career and pick out the highlights, Shane somewhat ruefully discounted this season for him personally, where he estimated that he only played in approximately four games.  Casting his gaze further back, he recognised winning the European Cup for the first time in 2009 as a career highlight and very fond memory.

Killian then switched the spotlight to Gordon and began by asking him about the dilemma he faced when invited to tour with Ireland by Warren Gatland just before his leaving certificate was due to begin.  Gordon cited the idea of having to repeat the leaving cert as the most frightening prospect at the time, and he turned down the opportunity to travel to South Africa.  When asked about his plans for retirement post RWC, Gordon put enjoyment on top of his list, coaching firmly on the bottom of the list, and taking some well-earned holidays with his family also very high on the list. In spite of being all around the globe with his career, Gordon lamented that he saw far too much of the inside of hotels and not enough of the countries visited.

Returning to Shane, our host enquired about his time in Leicester and his motivation for going there.  Shane recalled that he was 23 at the time, had just been offered a less than favourable contract and he felt that he had no other option but to leave Leinster. Although initially hesitant about signing for Leicester, Shane told the gathering that it transpired to be a positive experience, where he was treated well and did some learning there too.  Shane was then asked what advice he would give to young children who are up at their rugby club training in good and bad weather.  Shane put the emphasis firmly on enjoyment, that if they really enjoy what they are doing, as he assured us that he did throughout his career, and be respectful to those around them, they would then get the most from the game.

Killian turned the attention back to Gordon, asking him for some insight as to how he dealt with being out injured for sustained periods mentally.  Gordon acknowledged that it could be mentally challenging, particularly if an injury outlasted the estimated recovery time.  He added that it also could be a time of isolation – when the team were on the pitch, you were in the gym and vice versa.

The attention was then focussed on the future for Leinster Rugby as Gordon saw it. He stated that the club didn’t live up to the very high expectations of many people this season, notwithstanding that we were literally inches away from being in a European Cup final. He also felt that there is a solid core in the squad and that, having reset their goals, success could again be achieved.

Shane addressed the next issue up for discussion, that of the importance of the role of the supporters and what their support means to the players.  Shane was quick to emphasise the importance of the support to the squad, players and management alike, and the sacrifices in terms of family time and finances that supporters make to cheer the team on.  He alluded to the development plans for the RDS in the future, hoping that the OLSC would have a warmer premises in the new development (Shane was well wrapped up in his overcoat).

Killian then wondered if Shane would continue playing rugby at any level post retirement.  Shane told us that given the restrictions placed on retiring professionals, he may have to wait a while before possibly joining friends in either St. Mary’s or Lansdowne to play a few games.  Aghast at the suggestion that he might play tag rugby, Shane assured the assembled fans that “That game is STUPID”, so don’t hold your breath on getting Shane onto your tag team!

Moving onto the subject of charitable endorsements, our host listed a number of charities that Shane and Gordon have lent their support to, and asked of the importance of such activities.  Shane spoke of the culture of charitable work and partnerships which has built up with IRUPA, Leinster and individual players over the years.  He pointed out that although he had been lucky with regard to his career and the health and wellbeing of his family, not all families are so fortunate, and that he and his colleagues are happy to do what they can to raise awareness and/or funds for the charities involved.

Nearing the end of the conversation, Killian turned the attention to aspirations for the forthcoming Rugby World Cup.  Shane quickly pointed out the importance of managing expectations when embarking on such a mountain to climb. He pointed to the necessity of building momentum during the group stages, the challenges that the squad will face, for instance playing in unfamiliar stadia like Wembley and the Olympic stadium. Squad fitness will be another issue to be surmounted.  Shane told us of his impending excitement anticipating the RWC, comparing it to the heady days of 1990 and 1994.

In drawing the night’s proceedings to a conclusion, Killian acknowledged the massive contribution that Gordon has made to Leinster Rugby, reaching a magnificent 261 caps for the province, before inviting OLSC President, Rebecca Leggitt  to present specially commissioned pieces of crystal to Gordon and Shane as a token of appreciation from the supporters.  This prompted a well-earned ovation from the gathered supporters in the Laighin Out.

Many thanks to Killian for acting as our host, and to both Gordon and Shane for taking time out to visit us. Thanks also to Leinster Rugby for their co-operation.

See photos from the Q&A here