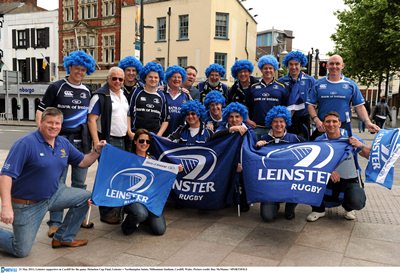 Fixture information for both Europe and the Guinness PRO12 has now been released, to this end the Official Leinster Supporters Club (OLSC) has prepared travel information for those wanting to head on the road to support the boys in blue…

Direct flights operate to Glasgow International (closer to the ground that Prestwick) by Aer Lingus. The stadium is 11kms from the airport and is 6lms from the city centre. The best way to get to/from the ground is by taxi.

Charter Option:
Joe Walsh Tours as official travel partner to the team have a charter option where you can fly with the team. You’ll depart on Friday and return after the game. For details see here

Match Tickets:
Information on where in the ground to purchase tickets so that blue can be together will be advised by the OLSC later this month.

The OLSC will once again run a same day bus that will leave Dublin city centre on Friday afternoon returning after the game, full details with times and departure/drop off points will be provided to those who have booked and prepaid for the seats the Tuesday of the game.

To book, please send €;20 with your name and mobile number via Paypal to olsc@leinsterrugby.ie

Match Tickets;
So that the blue can be together, we recommend buying Main Stand Terrace tickets here

The nearest airport for this game is Parma, unfortunately there are no scheduled direct flights from Ireland (Ryanair serve from the UK).

Charter Option:
Joe Walsh Tours as official travel partner to the team have a charter option where you can fly with the team. You’ll depart on Friday and return after the game on Saturday night. For details see here

Match Tickets:
Information on where in the ground to purchase tickets so that blue can be together will be advised by the OLSC in September.

Aer Lingus fly to Toulouse and have added flights on Friday and Monday of the weekend, from here you would need to connect to Castres by rental car or train (journey time 90 mins). The existing Ryanair flight out of Carcassonne is not suitable for those wanting to see the game. The OLSC is in contact with the airline to see if a change to their schedule is possible to facilitate supporters. Further updates will be available here and via our social media channels as soon as possible.

Any possible OLSC airport buses will be assessed after we have an update from Ryanair and normally run on a subject to demand basis.

Match tickets:
Season ticket holders are encouraged to purchase their match tickets from our official away allocation once it is known. Details will follow along with an area to purchase from this allocation to ensure that the blue is together as possible.

Other away European fixtures:
The exact date and times for these fixtures are not expected to be announced until November, in the interim only weekend of dates are known. Both venues will be familiar with many supporters as we have visited before.

More detailed information will be provided when kick-off details are confirmed.