Out and about in Treviso… 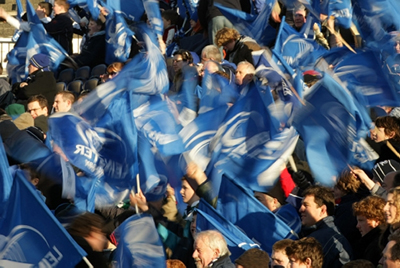 Treviso is an attractive town in the Veneto region of north-east Italy, with a population of around 80,000…

Rebuilt and restored after Second World War bombing, the town centre is a rambling maze of streets lined with arcaded walkways. Looking up, you’ll see fragments of the painted frescoes which once decorated Treviso’s houses. The town is circled by a town wall and by waterways.

The town is home to the clothing empire Benetton, which has a large store behind the Palazzo dei Trecento in the town centre. Unlike Venice, this town doesn’t depend on tourism – you won’t find tacky tourist shops, silly hats or bullying tour guides, just a well-off Italian town going about its daily business.

Be blue, be seen and be heard

As usual, make sure you wear your brightest blue jerseys and get behind the team from before kick off.  Wherever possible please bring your own flags however the club hopes to have a limited number to hand out at the ground before the game.

Gates open on match day at 4pm (KO is 7.05pm local time). We would encourage people to meet at the Stadio Monigo stadium restaurant and bar. Located behind the main stand, meeting here early will allow you to soak up some atmosphere with the home supporters as well as being able to access the free seating area as a group.

Post match, Porta san Tommaso is a favourite area with a number of Osteria (Pub’s) some of which also serve food. One that comes recommended to us is Osteria Trevisi, in the centre of Treviso. It is owned by a former rugby player called Marco Tonietto. It has a dazzling choice of wines, supplemented by the usual cold cuts of meat and cheese. It doubles up as a rugby bar and the walls are decorated with old rugby paraphernalia, mostly to do with the town club, this can be found at Vicolo Trevisi 6.

If you are looking for a restaurant, try Pizzzeria-Ristorante sant’Agostino, Via Sant’Agostino 35. This rugby restaurant has walls decorated with jerseys from around the world. They have a lot of space and fast service so make sure you pay a visit whilst you are in town.

The stadium holds 9,000 people and is located 3.5kms kms north of the city centre on the Via Olimpia. You could take a taxi or bus 2 or 9 from outside Duomo (the cathedral) near the train station. If walking there is the Wishing Well pub for short break on the way otherwise take a taxi for approximately €;5. The Full address for the ground is,   Stadio Monigo, viale Olimpia, 2. Treviso. If you have yet to purchase your match ticket, most Leinster supporters will be in Tribuna Laterale Coperta INTEREO.

The Calmaggiore is Treviso’s top shopping street, a vaulted medieval arcade lined with Italian designer label stores. The well-known shoe store Cappalletto is located at Piazza dei Signori 10. The Benetton Mega Store can be found at Piazza Indipendenza 5. If you are in Treviso on Saturday morning, be sure to visit the market near the Porta san Tomaso, you will sometimes see seconds being sold direct from the factory from as low as €;5.