Over 8,000 EURO raised for ABC through Ladies Night… 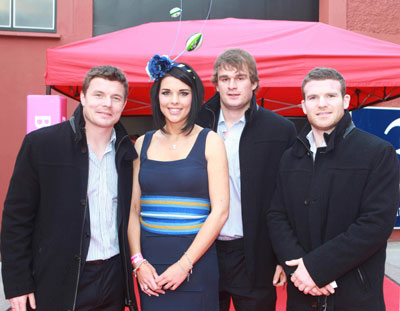 Leinster were winners on the pitch in the RDS on Saturday night while Action Breast Cancer was the big winner off the pitch with over 8,000 EURO raised on the annual Ladies Night…

A stylish and fun-filled evening kicked-off in the Serpentine Hall before the match which saw Leinster female followers take centre stage.

Leinster ladies were asked to don their finest blue outfit with stars Gordon D’Arcy and Rhys Ruddock judging the best-dressed “Blue Belle” competition, sponsored by Bank of Ireland. There was great colour and style on display and the title eventually went to Breena Cooper from west Dublin. Breena wore a specially designed “Leinster rugby head piece” which she created herself using mini rugby balls to accompany a navy blue dress with a Leinster scarf stylishly used as a belt.

Second place in the hotly contested best-dressed stakes was Teresa Carberry from Ardee, Co. Louth who turned a Leinster flag into an elegant and tasteful one-shoulder dress.

The Serpentine Hall was rocking with live music and a drinks reception sponsored by Eve, while ladies had the chance to get their make-up and nails done or relax by getting a massage. There were also gift bags with goodies from Nivea, Waggamammas and Cadburys among others for the first 300 ladies through the doors.

The exclusive OLSC ‘Give Breast Cancer The Boot’ T-shirt also went down a storm with all proceeds from the sale of the T-shirt going directly to Action Breast Cancer.

Due to demand, the Club is accepting orders for these T-shirts for the next few days only. To purchase a T-shirt send €;20 via Paypal to olsc@leinsterrugby.ie specifying the size required (lady fit sizes 8-14 and mens’ sizes S-XL) by Friday 22 April. T-shirts will be available for collection from the RDS at the Glasgow game. If you would prefer to receive your T-shirt by post please pay €;25.

Brian O’Driscoll was among those enjoying the pre-match activity while a selection of players’ wives and girlfriends also popped in before cheering on the Boys in Blue.

Post-match the event was topped off with a bumper raffle with supporters taking home generous prizes sponsored by Optimum Nutrition, Paramount, SimplyWines.ie, the RDS, the Leinster Store, Roast Ballsbridge and Guinness. Anna Masterson was the lucky winner of a Tag Heuer watch from Paul Sheeran Jewellers and Ari Musgrave took home the signed Leinster jersey.

A Leinster version of ‘Blind Date’ hosted by ‘Cilla Jack’ went down a storm with supporters and closed the event with lots of laughs.