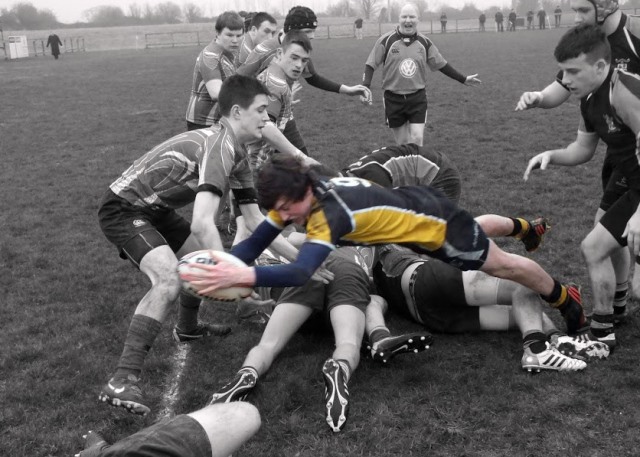 In only their second year of rugby in the school the Patricians of Newbridge have won their first Leinster title by beating St. Kevin’s of Dunlavin 24-11 in a hard fought final that took place in Cill Dara RFC last Tuesday evening…

The first 10 minutes saw both teams edging their way into the game until Dunlavin struck first with Eoin Murtagh kicking a penalty from 20 metres out. Not long after Peter Howard (No.13) from Patricians powered his way through the Dunlavin defence to score the first try of the game. This paved the way for the Newbridge side to dominate the rest of the first half with Cian Scanlon (No.9) getting his first of two tries of the afternoon.

A third followed five minutes later when a penalty try was awarded after Gary Maguire was taken out five metres from the line as he chased a kick-through.

Trailing 17-3 at half-time, Dunlavin came out fighting and with sustained pressure were awarded another penalty which was converted by Murtagh. Midway through the half Dunlavin eventually found a chink in a strong Patrician defence when Brian Miley touched down from a cross field kick into the corner.

Patricians did well to weather the storm however and with three minutes to go Cian Scanlon settled it by snipping the ball off the base of a ruck and diving over to seal the win. Adam O’Brien (No. 15) kicked the conversion which saw the Patricians win an historic first Leinster title for the school.