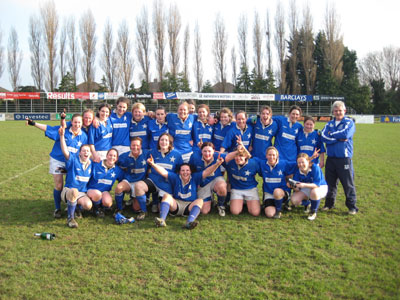 This weekend sees the commencement of the inaugural Paul Flood Cup, comprising of 15 senior adult women’s teams from Leinster and two from Connacht taking each other on over four rounds of a round robin…

So who is Paul Flood and why is the Leinster Branch moved to honour him? Paul was a stalwart of St. Mary’s College rugby since his interest was piqued at school in St. Mary’s RFC. This fascination with rugby was carried through his secondary school years in Templeogue College where he was a member of the team which reached the Senior School’s cup semi-final in 1973.

On leaving school he joined St. Mary’s College R.F.C where he drew a legacy of rugby that spanned thirty five years of dedication to the cub. Paul was a very accomplished winger for a career lasting thirty three years before hanging up his boots and lending his experience in the coaching of the clubs teams. Paul played for the 1st team on many occasions and competed for his place against International greats such as Tom Grace, Terry Kennedy and Jimmy Bowen.

He was a prolific try scorer at all levels and was almost unstoppable when he had the line in his sights, a consummate finisher. A key member of many cup and league winning teams playing well into his 40’s, Paul’s love for rugby showed no bounds and he managed to include refereeing, coaching and tag rugby organising as part of his routine while still continuing with his playing exploits. He was always only a phone call away from participating in any capacity.

He took a keen interest in the development of women’s rugby in St. Mary’s by helping out in whatever manner he could before assuming the mantle of coach when the call came. He fulfilled that role with the same enthusiasm he put into every other aspect of his rugby career and he was a strong advocate and promoter in improving the facilities, administration and coaching/training support for the women’s game. He was dedicated to his squad and believed in trying to ensure that all members got their share of ‘game time’.

Under his guidance St. Mary’s women’s team made tremendous strides reaching the All-Ireland Women’s League Division 2 semi final in the year of his passing, 2008, and going on from that to achieve success in the same competition the following year. Paul also guided the team to the 2008 All Ireland Bowl Final against UL and although defeated, Marys put up a storming performance against the AIL Champions. Paul was immensely proud of the success and achievement of the team and the memories of the day and celebrations with Paul will be forever cherished by the women’s team.

He was highly respected by opposing teams his passion for the game still remains as an inspiration to those members of the squad who served under him. They and the Club will forever be grateful to Paul for his input.

The final will see the top two sides battle it out and it will be played in Paul Flood’s club of St. Mary’s College RFC on February 28th at 3pm.