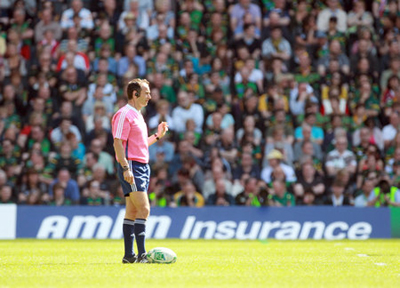 Romain Poite will referee his first Heineken Cup final when he takes charge of the season’s showpiece European club rugby match between Leinster and Northampton Saints at the Millennium Stadium on Saturday, 21 May (KO: 5pm)…

The 35-year-old French official was on duty during both knock-out stage weekends last month, controlling the Heineken Cup quarter-final between Northampton Saints and Ulster Rugby and the Amlin Challenge Cup semi-final between Munster and Harlequins.

ERC, the tournament organisers, have announced the referees for their two prestigious and high profile finals with George Clancy (Ireland) appointed to control the Amlin Challenge Cup final between Harlequins and Stade Francais Paris at Cardiff City Stadium on Friday, 20 May (7.45pm).

The 34-year-old from Limerick was also in knock-out stages action, taking charge of the semi-final between Northampton Saints and Perpignan at stadium:mk nine days ago.

Both Poite and Clancy are among the elite 10 officials named as referees for the World Cup in New Zealand later this year.