Port back on track after ten try romp… 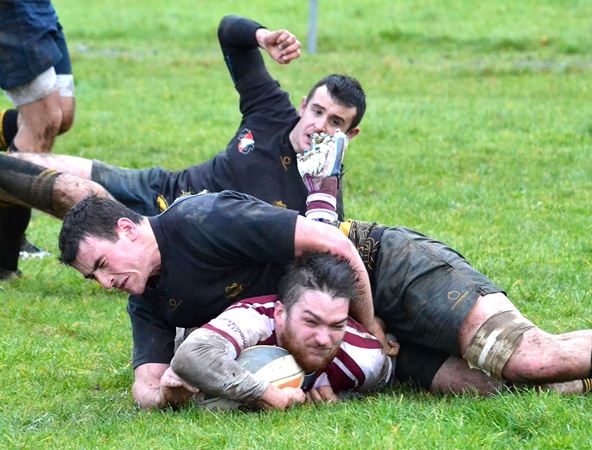 Garda opened the scoring with a well taken penalty from distance but the Port out half Kieran Hyland responded with a kick of his own after 5 minutes. The home side then took the lead with another Hyland penalty after great work at the breakdown from Declan Hennessy on 11 minutes. The visitors levelled after 16 with a drop goal but from then on the Port men found their rhythm and dominated in perfect playing conditions.

The first try came from centre Stephen Mulhall after 21 minutes and this score was quickly added to by Port’s outstanding powerful prop Cathal Bannon two minute later. Mulhall got his second try eight minutes later and then the visitor’s task got a lot tougher when they had their inside centre sin binned for a dangerous tackle on Joander Brazon after 36 minutes.

Port took advantage of the numerical superiority and on the stroke of half time Leinster Junior wing Ross Doyle followed up a clinically accurate kick through from former county footballer Padraig Maree to secure the bonus point and a 32-6 lead.

It didn’t take long for Port to get on the board again as full back Denis Boland touched down just one minute after the break. Five minutes later Stephen Mulhall bagged his hat-trick score after a selfless offload from the outstanding Declan Hennessy. A strong run from scrum half James Hyland brought the next score as he powered through the Garda defence to finish well.

The club captain’s score was then followed by a quick fire brace of tries from the hugely influential back rower Mark Petriu to bring the score to 59-6. The tenth try was then scored by Serbian international Alex Mihajlovic. The big lock fully deserved his score after another strong performance with some huge hits in defence and strong carried in possession.

Port’s next outing will be a visit to Wicklow, who they beat convincingly in the opening home game of the season, on Sunday December 1st. Coach Johan Taylor will be hoping that last weekend’s confidence boosting performance will help them to build on this result.

Click here to view exclusive photos from the match.