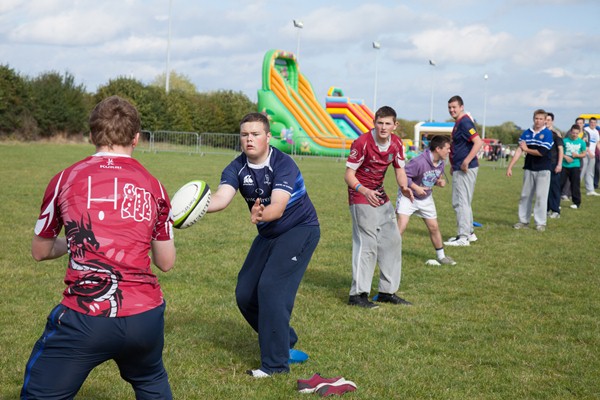 A packed programme of events drew a huge crowd of families from near and far on a day when the sun shone and records were broken. The day began with minis matches between the clubs youngest players and their counterpart from Clane RFC. As these games finished Port’s U13’s and U17’s kicked off games against Portlaoise and Naas respectively but the matches were merely the entrée for the day’s main event – a free family fun day which the club had been organising all summer.

Local radio station Midlands Radio 3 broadcast live from the event all afternoon and in an on air interview club President Padraig Maree thanked sponsors The Heritage Hotel Killenard and Fastway Couriers for their considerable support which ensured a free day packed with activity for kids of all ages.

There were Irish dancing, drama and musical performances on the outdoor stage, face painting, tea rooms and a Mad Science show in the giant marquee and field games, sports day and bouncy castles on the pitches. One of the highlights of the day was The World Bowley Championships as younger generations got to compete at a game that entertained their parents and grandparents during their own youths!

The main events however, were the attempts to break two world records. The first was involved U19s players completing as many passes as possible in three minutes and their score of 273 smashed the previous best of 234. The second was an attempt to beat a record for the world biggest scrum. Participants in this attempt had raised sponsorship for the club and the final total of over 500 was impressive but short of the required 840.

Present on the also were Leinster’s RaboDirect PRO12 and Amlin Challenge Cup as well as the Women’s Grand Slam trophy. Irish internationals Fiona Coghlan and Nora Stapleton came along to lend their support and despite obliging the huge crowds with photos and autographs both girls found the time to compete in the Bowley Championships and the giant scrum.

The day concluded with an evening of storytelling from down the years as the club kicked off their 40th birthday celebrations. Members and invited guests filled the clubhouse as previous captains and presidents recalled memories of club successes both on and off the pitch. It was a fitting end to a wonderful day that showed Portarlington RFC off in a wonderful light and introduced both the club and our sport to some new faces.