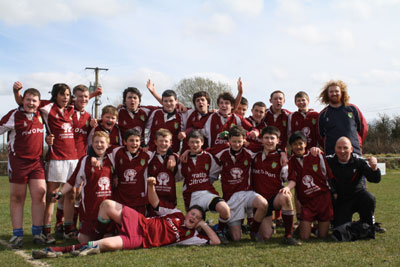 This, the fifth meeting of the sides this season also doubled up as a first round Plate encounter and Port took the spoils playing a high tempo game that never allowed their fancied opponents gain a foothold in the game.

From the off Port took the game to Athy and looked to make use of their powerful forward unit at all available opportunities. Some clever kicking from out half Graham Weldon kept Athy pinned back and Port were already exerting huge pressure on the Athy set-pieces. Ciaran Kavanagh stole two early line outs on the Athy throw and it was from the second of these that the ball was spread wide and Alex Whittle drove for the line. When he was stopped just short team captain James Brennan was on hand to burrow over for the try.

Scrum half Keith Kavanagh added the conversion to put Port seven points up. Port continued to press but unfortunately the final ball just failed to go to hand on a number of occasions. Any chances Athy had were swiftly dealth with by the hard working Port defensive line with Sean Higgins, Cormac O’Hora and Keith Kavanagh excelling while Athy’s pack were really starting to struggle against the immense Port eight. The score at the break remained the same 7-0 in favour of Port.

Port started the second half where they had left off in the first with Barry Higgins causing Athy all sorts of problems while the front row of Cian McKeagney, Jack Hennessy and James Henry wreaked havoc at scrum time. Reward for their efforts came through a well struck Keith Kavanagh penalty to stretch Port’s lead to ten points. Athy did have their moments with centre Tadhg Foley making one good break down the left wing only to be stopped in his tracks by an Anavil Storey cover tackle, Whittle forced the turn-over at the ensuing ruck and Port were back on the attack again. Breaks from Brennan, Storey and Aaron Colbert kept Athy on the back foot but Port just couldn’t find a way through.

That was until from a quick tap penalty inside the Athy 22 Brennan made it almost to the line where quick thinking from scrum half Kavanagh allowed him sneak through a gap in the Athy rearguard for the score. Kavanagh added the conversion to take his haul for the day to twelve points as Port rolled the changes. However the miserly Port defence remained resolute for the dying minutes and played the game out in the middle of the field. Great celebrations greeted the final whistle as Port ran out victors on a 17-0 scoreline.

The win puts Port through to a final meeting with Ashbourne, a side who inflicted heavy defeat on Tullow in their semi final. But if Port can replicate their fifteen-man all action performance, it’s hard to see any side standing in their way.