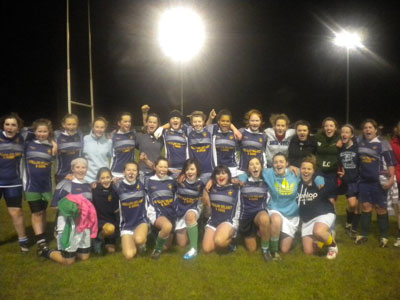 Both clubs were selected to play in this fixture by the Leinster Branch Ladies Rugby Committee.

They shall be the first Ladies to play in the new home of Irish Rugby which only opened in June this year. The initial idea for girl’s rugby at Portlaoise Rugby Club came from members of the senior squad who recognised the need recruit girls at a younger age in order to develop greater skill levels and develop a much broader understanding of the game and therefore creating a stronger women’s team in the future.

Commencing on the 10th September under the guidance of Jean Delahunty, Yvonne Delaney, Carrie Connell, Alison Miller and Youth Co-ordinator Harry Nicholls, 15 girls turned up for their first training session.

After three months this has increased to nearly 40 girls playing at either Under-15, 17 or 19 age levels. The girls have played in a couple of training games to date in preparation for Saturday’s game the Portlaoise girls hosted Cill Dara at Togher last Sunday afternoon. The current girls squad are made up of Gaelic Footballers, Athletes, Hockey players, Camogie players and for some of today’s team being part of the first girls rugby game to be played at the Aviva Stadium it is no doubt their biggest sporting highlight to date.

Traditionally Laois women have excelled in sports such as Gaelic football and Athletics and therefore the future of girls and ladies rugby in Portlaoise looks very bright indeed.