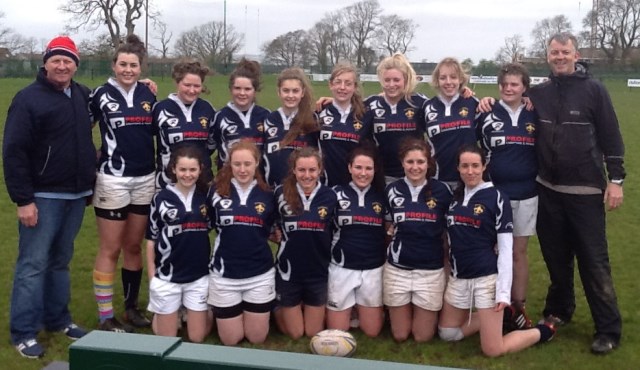 Hot on the heels of their Championship performance in Leinster League Division 1, Portlaoise U18 Girls extended their winning ways to Munster when they travelled to Castletroy College in Newtown, Limerick.  This was the first time they took part in the end of season Munster Blitz and they did so confident in their own ability but unsure of the strength of the opposition. The event provided an opportunity for development players to become more involved in the action. It was also a chance to test their prowess in Munster.

Portlaoise were billed to play Carrick-on-Suir and Cashel. In the first game against Carrick, Portlaoise felt their way at the start. They were without some of their transition year players away in Paris. Abigail Mullen, Emma Startin, Niamh Riordan, Eimear Lynam Rebecca Mullen and Sarah Culliton battled well in the forward line. Initially Mairéad Keogh, Tara Buggie, Lauren Roberts, Áine Comphuijsen; Laura Scanlon; Aoife Murphy, Anna O’Neill and Orlaith Phelan were contained at the back.

However it was not long before Orlaith Phelan opened the scoring with a magnificent try in the corner. In what proved to be a tight encounter Carrick got back on level terms soon after with a try. In the second half Sarah Culliton, who has been outstanding all season as a playmaker and winner of the ball, took on a scoring role and crashed over for a try near the posts. Anna O’Neill converted in clinical fashion to put the outcome beyond doubt 12-5.

Portlaoise with their tails up now took on Cashel put on an impressive performance by the back line and the strong forwards. No less than five tries came from Rebecca Mullen, Orlaith Phelan and Anna O’Neill. O’Neill added two conversions for a convincing victory of 29-12.

Portlaoise proudly added the Munster Blitz Title to their much coveted Leinster League Cup.
Portlaoise hope to compete in the exciting Sevens tournaments during the summer, as U18 are allowed for the first time in Greystones and Midlands.