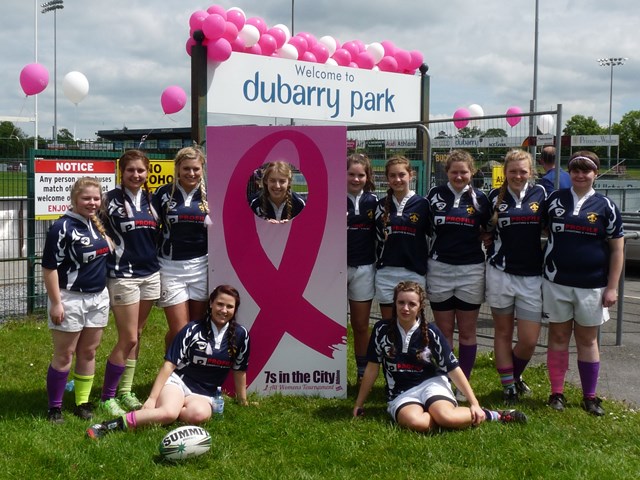 Portlaoise U18 Girls travelled to Buccaneer’s RFC in Dubarry Park, Athlone for the inaugural all-female Sevens in the City tournament in aid of women’s cancer. This was the first time Portlaoise played Rugby Sevens in competition at this age group…

The team named the “Seven Deadly Sins” reflected the massive growth in popularity of this sport among schoolgirls in Ireland and around the world since it has been designated an Olympic sport. The girls trained with Sevens specialist Mark Roberts in the previous three weeks.

The format was round-robin with four teams qualifying for the semi-finals. The speed and intensity of the game is such that the time allowed for each half is seven minutes except in the final where it increases to ten minutes.

The Seven Deadly Sins from Portlaoise emerged from the group stage to the semi-final with tries from Tara Buggie and Anna O’Neill.

Portlaoise constantly tested Union’s drift defence exploiting their player with a step or and inside pass. A typical move from Áine Camphuijsen, playing scrum-half, picked, dummied and stepped her opponent to run in a superb try. Portlaoise were always a threat with the ball and emerged deserving winners with further tries from Rebecca Mullen and Lauren Roberts. Railway Union had no reply and Portlaoise progressed to the final with a score of 15-0.

The final against Carrick on Suir proved a bridge too far with Carrick sporting three girls from the international squad. Róisín McWey scored a marvellous try. The outcome of two tries to one augers well for the Portlaoise side who have just commenced training in this new code. Portlaoise also have a number of players in reserve who were unavailable for this debut.

Portlaoise are currently recruiting players and athletes who would like to play this exciting brand of rugby and emulate their previous or current international schoolgirl squad players Anna O’Neill, Aoife Murphy and Eimear Corri.

The next Sevens’ matches are in Greystones on July 12th.