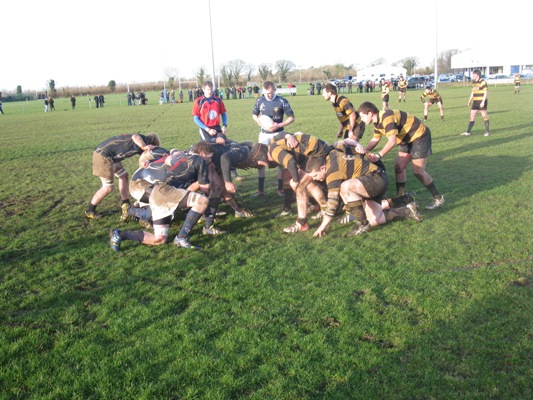 More importantly they resumed their winning way with the J1 side’s bonus point 27 – 18 win against Portlaoise consolidating their second place in Section 2A of the Leinster League.

Carlow started strongly with good bursts from the Nolan brothers James and John Michael and the Farrell twins Ronan and Barra.

On 16 minutes Ronan Farrell crossed for a try in the left corner. Ritchie Whyte missed the conversion but within a minute Carlow had another try when Ian Costigan touched down in the right corner following a good James Nolan break. Again Ritchie Whyte was wide with the difficult conversion.

Carlow started giving away a continuum of penalties. First Portlaoise hit an upright but then scored a penalty in the 33rd minute to leave the score at 3 – 10.

On 36 minutes Carlow scored their third try when John Michael Nolan followed up a sweet Ritchie grubber kick to the corner. This time Whyte converted from the touchline and he scored again on the stroke of half time with a penalty to give Carlow a healthy looking 20 points to 3 lead.

Any hope that Portlaoise would roll over were quickly dispelled when they drove at and through Carlow for most of the 2nd half. Port scored first on 10 minutes with a converted try. In the 19th minute Carlow were awarded a penalty near their own posts but this was reversed because of backchat and the kicked penalty put the hosts within a converted score of Carlow at 13 – 20.

Instead of spreading the ball in search of a fourth try and a bonus point inexplicably Carlow seemed determined to take on the burly Port back. Three times the host’s forwards muscled their way across the Carlow line only to be held up from placing the ball on grass. Twenty five minutes into the 2nd half Carlow made a rare raid in the host’s half. A good lineout ball was for once spun out wide and Number 6 James Nolan burst through to score beside the posts.

Whyte converted to give the visitors a barely deserved 27 points to 13 lead.
The Portlaoise pack continued to rumble and maul. They scored again to make it 18 – 27 but time ran out for them.

Carlow have added 5 points to their league table bringing them to 40 points. League leaders Gorey are on 48 pts but Carlow have a game in hand and are due to play Gorey in Carlow.

But in the interim, next week there is a big fish to fry as Carlow play Newbridge in Oakpark in the 2nd round of the Town’s Cup.

J2 Match.
Portlaoise 12 Carlow 52
The strong Carlow Junior 2 side also had an easy win in Portlaoise beating their hosts by 52 – 12 in an 8 try fest. Carlow led 25 nil at half time. This included a try hat trick from centre Jack Phelan plus one each from Simon Walshe and Eoin Bailey. Bailey converted all five. In the second half into the wind Carlow scored three more tries, two from hooker Joe Gorman and one from sub Kevin Hanley which was converted by Bailey..