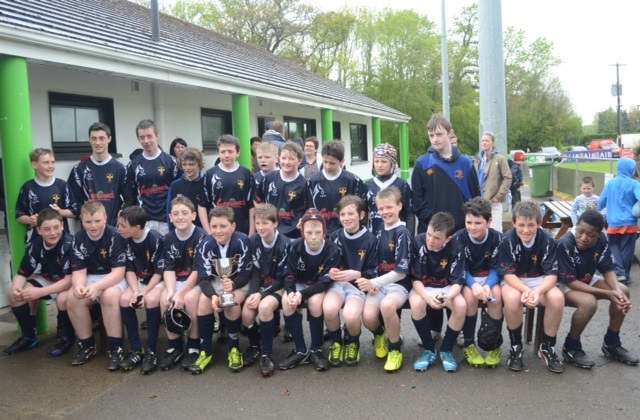 Last Saturday Portlaoise U13s headed to Naas to play what was to be their last game of the 2013/14 season.Their adversaries were Athy ,buoyant from having already one prize in the trophy cabinet the Leinster Plate and the scalp of this years Leinster Champions Naas who they defeated the previous Thursday on their way to this final.

Portlaoise started the season with high expectations , they were now chasing the last piece of silverware, having been knocked out of the leinster Cup by the champions Naas and lost the Leinster Premier League final to Naas two weeks previously.

Portlaoise faced this game with intent that the last 8 months of hard work was not going unrewarded. Kick off was 1.30pm and heavy downpours and wind set the tone for this attritional game.

Athy started the stronger of the two sides and set their stall out using their large pack to drive at the Portlaoise defence and with aggressive rucking allowed their backs to move the ball quickly. Portlaoise were up to the task with Captain William Reilly setting the defence line and the threequaters in Brian Dunne and Allan Connolly defending magnificently .Fifteen minutes in and against the run of play, after an Athy knock on inside the Portlaoise 22 which gave Portlaoise the scrum.Portlaoise put the ball quickly through the hands bringing in winger Bryan Redmond who ran the length of the pitch to ground the ball under the posts and give William Reilly an easy opportunity to convert , score after 14 minutes of play Portlaoise 7 Athy 0.

Athy were not thwarted and recommenced what they had started.The size of the Athy pack and the physicality they were bringing to the Portlaoise defense was beginning to take its toll.Firstly Jordan Radcliff replaced Brian Dunne at inside centre and Lock John Startin had to be replaced because of a blood injury and winger Bryan Redmond was replaced by Robbie O’Rourke due to an ankle injury.Despite these changes Portlaoise defense stuck to its task, with Athy having to settle for a penalty kick on the stroke of half time to leave the score at the break 7/3 to Portlaoise.

During the interval Brandon Nolan had to be replaced by Brian Dunne as wing forward due to a heavy knock.Portlaoise started the second half in the full knowledge its pack in Paddy Coss, Eoghan Fitzpatrick, and John Keogh were going to have to match Athy in physicality up front to allow the flankers Adam Duffin and Brian Dunne along with No.8 Eoghan Brennan to drive at the Athy defense. Both teams went at one another for 20 minutes in the second half defending aggressively .Portlaoise had adopted a defensive diagonal kicking ball using the pace of winger Adam Dunne to exert pressure on the Athy backs and keep them in their own half giving some relief to the Portlaoise defense. This tactic was to reap its reward and with 5 minutes to go against the run of play Allan Connolly kicked a relieving kick which was chased by Adam Dunne who outrun the Athy winger only to be tackled without the ball leading to a penalty try under the posts which was duly converted by no 10 William Reilly.This score was much to the relief of the Portlaoise coaches and management who now knew victory was close. Athy to their credit continued to attack with no result and when the final whistle blew it was the Laois boys who ran out victors with a score of 14 to 3 seeing them become North Midlands Area League Champions for 2013/14.

Portlaoise Rugby Club would like to pay a special tribute to the community of support that has built up around this squad of players, from the tea and sandwich makers, the transporters who carried them throughout Leinster, the parents, the physio (Mick) and all those throughout the year to support these 12 year olds on their journey in rugby.