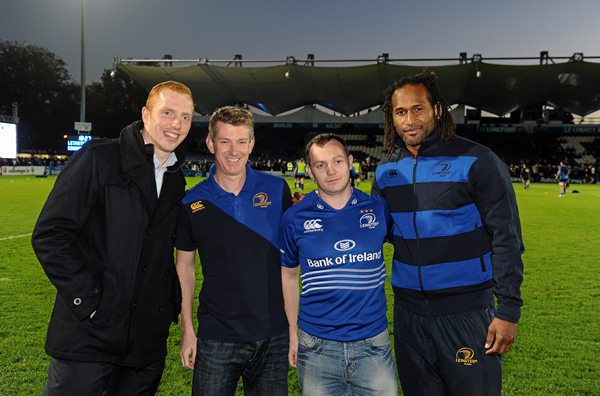 Barry is notorious for sending in articles to Leinster Rugby promoting the various club events and boosting the profile of Portarlington RFC by highlighting the various sections within the clubs such as youths, mini’s, girls, women’s and the senior team.

One of Lambkin’s biggest achievements to date was running the ‘Big Push’ within the club in September. Barry put a massive emphasis on the event and encouraged all the local media and radio to come down to the club and take part in breaking a world record. The U19s players completed as many passes as possible in three minutes and their score of 273 smashed the previous best of 234.

In order to show say a small ‘thank you’ to Barry for all of his hard work, we invited Barry up to the Leinster V Connacht game where Leinster players Darragh Fanning and Lote Tuqiri posed for a photo pitch side. Barry also got to sit in some very exclusive seats sitting behind Cian Healy and Richardt Strauss.

Barry added ‘Just wanted to say a huge thank you for Saturday. It was brilliant. Couldn’t have enjoyed it more.’

At the end of November, we will be choosing another Club Publicity Officer of the Month and will be rewarding somebody at the next Leinster home game. If you want to increase your chance of winning next month’s PRO, all you have to do is start sending us in articles about various aspects of your club. Has your club won their last match? Did you recently start an underage girls’ team? Do you have a fundraiser coming up?

Using the Leinster Rugby channels in conjunction with local press will attract and retain members, recruit volunteers, attract and secure sponsors, create awareness in the wider community and generate recognition of achievements on and off the pitch…so what are you waiting for?  Start sending in articles to stories@leinsterrugby.ie.

Click HERE to view the Marketing and Communication Guidelines for club and school PRO’s.