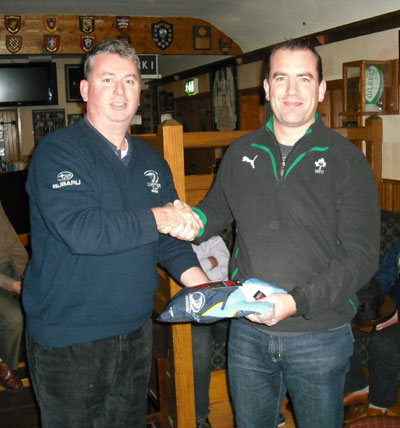 Philip Mullins, a native of Skerries and former player, successfully passed his trial match and was recently elected as a full member of Leinster Rugby Referees. This continues a proud tradition for the North County Dublin seaside club who have produced a number of notable referees for the game over the years.

Speaking at a recent North East Area Meeting, Mark Power (Area Representative) congratulated Philip on his election and said that he was a worthy addition to the Referees in Leinster.

Philip was presented with his referee kit at the meeting and received a standing ovation from the attendees. He took up refereeing in his early thirties when he finished his playing career and following a Referee Foundation course with David Keane IRFU, Philip officiated at a number of youth and schools fixtures in the area to develop his refereeing skills and knowledge of the Laws.

Philip is married to Barbara and his other hobbies include hill-walking and keeping fit. Well done Philip and we look forward to seeing you blowing the whistle at the Heineken Cup final in a couple of years.