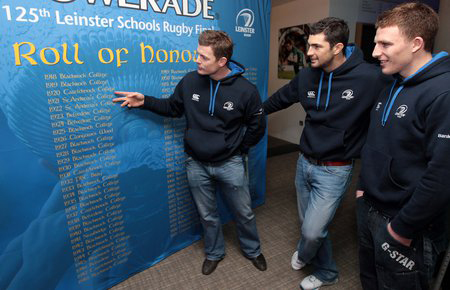 The draws for the Powerade Leinster Schools Rugby Senior, Junior and Development Cup competitions have taken place and the dates, times and venues have also been announced…

See below for all four draws

Rob Kearney, Brian O’Driscoll and Andrew Conway were also in attendance at the Aviva Stadium, reliving their schools rugby memories in conversations with Brent Pope.

With the matches scheduled to start in late January and running until the end of March, Leinster Rugby Chief Executive Mick Dawson said: “Over the course of the last 125 years, the Leinster Schools competitions have played an integral role in the cultivation of home-grown talent across the province. We are delighted to have the backing once again this year of Powerade whose ongoing commitment to the game of rugby, and indeed sport in Ireland, is unrivalled.

“To the Schools Committee and administrators, games-masters, match officials, ground-staff, coaches and players who help make this such an enthralling competition, I would like to thank you for all your efforts in ensuring the smooth running of the Schools game in the province. We look forward to another successful year and would like to take this opportunity to wish all competing schools in the various Junior and Senior Cup competitions the best of luck.”

Also speaking at the draw, Erica Roseingrave, Coca Cola Public Affairs and Communications Manager said: “Powerade is pleased to continue its title sponsorship of the Leinster Schools Junior and Senior Cup competitions, especially as we celebrate the 125th Senior Cup final taking place next March. Ireland and Leinster’s considerable achievements in recent times are due in no small part to the strength of the provincial schools rugby competitions.

“I would like to extend our best wishes to the players and coaches of all participating teams, but would also like to give special mention to their supporters, who add such colour and excitement to the finals every year.”