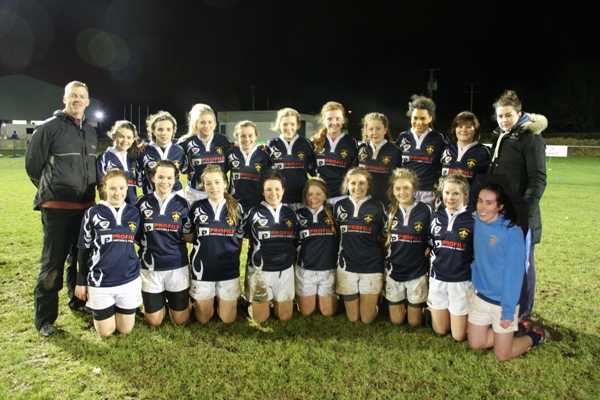 Girl of the Game: Aoife Murphy

Tigers are composed of the best players from Tullow, Gorey and Greystones Portlaoise has now opened a gap as a result of the top of the table clash.

This was the first time the sides had met and both had 100% record in the League. The game had been postponed because of bad weather and now a spicy encounter was expected, with the contest eagerly anticipated on both sides.

From the kick off Portlaoise out-hustled Tigers and prevented their huge forward line from gaining any territory what so ever. Play was contained between Tigers 22 and the half-way line.
The Portlaoise tight five consisting of front row Eimear Lynam Niamh Riordan, Abigail Mullen and locks Sarah Culliton and Shona Whelehan were more than a match for Tigers. The loose forwards Róisín McWey, Emma Hooban and Rebecca Mullen were first to make the tackle and reach the ruck.
The Tigers, who normally dominate play with central sorties and deft kicking against lesser sides, were completely neutralised and out-thought by the inspired Portlaoise forwards.

Portlaoise had 60% possession with a 75% territorial advantage. They won all 15 of their line-outs and stole five from Tigers. Sarah Culliton, Shona Whelehan and Niamh Riordan competed fiercely. Eimear Lynam’s accurate throwing and intelligent calls contributed hugely to the amount of clean ball commanded. Abigail and Robyn Mullen were stalwarts in defence and moving forward.

The new Portlaoise fly-half, Aoife Murphy, was like poetry in motion. The sheer power of her forward movement, the nimble dance like side-stepping , the perfect timing of the off-loads just on the point of impact and the speed of her thought that created options of passing left and right, rucking and running. This was matched by the skilful ball handling of the Portlaoise back line.

The passing was inch perfect and at pace and only two passes were dropped during the entire game. The already formidable line-up at the back was strengthened with the return of Faye Nolan and the inclusion of Laura Scanlon. Mairéad Keogh, Tara Buggie, Aoife Mc Neill, Anna O’Neill, Eimear Corri, Orlaith Phelan, Áine Comphuijsen provided an abundance of talent. Anna O’Neill made some fine surging movements stopped only by the Tigers resilient defence.

Tigers countered the back-line threat by forcing play into the central channel but at the ten minute mark Eimear Corri blocked a kick bound for the side-line, picked up and raced in a try between the posts. Emma Hooban converted.
Just before half-time in a desperate bid to clear their lines Tigers kicked cross field into the hands of Orlaith Phelan who ran around the defence to score in the corner.

Tigers were outgunned and Portlaoise led 12-0 at half-time.
Tigers contained the Portlaoise back-line in the second half but the loose forwards featured a lot in open play with the ball in hand. In a highly disciplined performance Rebecca Mullen played out of her skin with multiple carries and perfect presentation.

After a fine passage of multiple phased plays coordinated by Mairéad Keogh and involving the entire Portlaoise forward line Emma Hooban picked up, spotted a gap and engineered a brilliant try through heavy traffic.
Tigers responded by applying more pressure and Portlaoise were on the receiving end of many penalties. Tigers capitalised on the lapse in concentration with a breakaway try and conversion.

Portlaoise concentration returned and it was again the No. 8 Hooban who scored her second try in the corner a similar manner to the first.
Tigers managed a consolation try to bring the final score to 24-12.

The Referee’s Girl of the Game was Aoife Murphy.
This spirit of this performance was reminiscent of that of the U16 side that won the Leinster Cup in 2012. Many of the current squad played that successful season. The skill and fitness level is now much higher.

On the evidence of this vibrant display, Portlaoise will be confident heading into the away match against the Heifers in Mullingar.