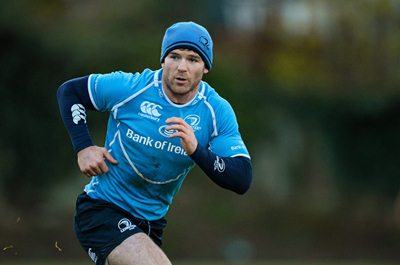 The Leinster team to face Exeter Chiefs in Saturday’s final round of the Heineken Cup pool stages in Sandy Park (KO: 6pm) has been named…

Richardt Strauss is named in the starting line up after missing the last month with an ankle injury and, in all, the Ireland hooker is one of three changes to the pack which started last weekend’s Round 5 victory.

Sean O’Brien has recovered from illness to join fellow returnee Kevin McLaughlin and Ireland captain Jamie Heaslip in the back row. Strauss, meanwhile, is named in the front row alongside Cian Healy and Mike Ross who is set to make his 80th appearance for the province.

O’Driscoll – who is in line to make his 82nd Heineken Cup appearance after featuring off the bench in last weekend’s bonus point victory over the Scarlets – is one of two further changes to the backline with Eoin Reddan selected to partner Jonathan Sexton at half back.

Rob Kearney continues in the back three alongside Luke Fitzgerald and Isa Nacewa.

In addition to Sky Sports 3 who will show the game live on Saturday, the Official Leinster Supporters Club (OLSC) can confirm the following international broadcast arrangements for those supporters around the world.

Live audio coverage will also be available as part of Saturday Sport on RTE Radio 1, this can be received across all waves lengths, the iPhone app and online at www.rte.ie/sport