Leinster team to face the Scarlets… 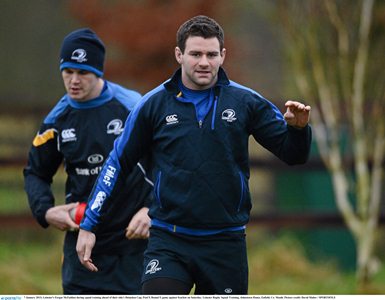 The Leinster team to face the Scarlets in Saturday evening’s sold out Heineken Cup Pool 5 encounter in the RDS (KO: 6pm) has been named…

Leo Cullen, who celebrated his 35th birthday on Wednesday, leads the province and is named in a starting line up which includes 14 Ireland internationals for the visit of the Welsh side.

Wicklow man Cullen partners Devin Toner at second row with Sean O’Brien set to make his 30th European appearance in a back-row which also features Shane Jennings and number eight Jamie Heaslip. Kevin McLaughlin misses the game with a shoulder knock but is expected to be available for the Round 6 clash away to Exeter Chiefs.

The front row is unchanged from the side which started last weekend’s bonus point victory over Edinburgh, so Cian Healy will make his 108th appearance for his home province alongside Sean Cronin and Mike Ross.

In the backline, Isaac Boss partners Jonathan Sexton at half back with Gordon D’Arcy continuing at centre alongside the returning Fergus McFadden who was rested last weekend, while Isa Nacewa is recalled to an experienced backline which also features Luke Fitzgerald – who makes his 105th Leinster appearance – and last year’s European Player of the Year Rob Kearney.

Brian O’Driscoll, who made his comeback last weekend, is being managed with him named on the replacements bench alongside fellow Ireland internationals Michael Bent, Eoin Reddan and Rhys Ruddock.

Meanwhile, in addition to Sky Sports 1 who will show the game live on Saturday, the Official Leinster Supporters Club (OLSC) can confirm the following international broadcast arrangements for those supporters around the world:

Our bases in London (Porterhouse Covent Garden), Birmingham (Oh Velvet), New York (Madhatter Saloon), Dubai (McGettigans) and Christchurch (Monza Sports Bar) will all be showing the game live. In Sydney, The Gaelic Club will be showing delayed coverage from 10am Sunday.

Live audio coverage will also be available as part of an extended Saturday Sport on RTE Radio 1, this can be received across all waves lengths, the iphone app and online at www.rte.ie/sport

Leinster team to face the Scarlets…