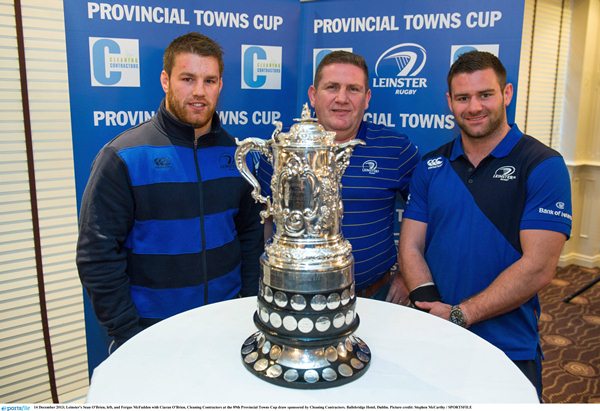 The 89th edition of the Provincial Towns Cup, sponsored by Cleaning Contractors gets underway across thirteen different venues throughout Leinster on Sunday as 29 teams go in pursuit of the venerable old trophy…

This year the Provincial Towns Cup would appear to be the most wide open in years with no clear favourite and any one of maybe ten teams entertaining genuine thoughts of April success.

The six Division 1A clubs, Dundalk, Cill Dara, Enniscorthy, Clondalkin, Newbridge and Tullow are the obvious contenders while Division 1B leaders Ashbourne, Division 2A pacesetters Gorey and Metro League Division 2 leaders Naas have developed winning habits and with a favourable draw could go a long way.

Kilkenny, Longford and Wicklow are well capable of causing an upset or two but have lacked consistency in the League while Co Carlow, Roscrea and Boyne have shown good form over the past month or two to gain the respect of their opponents.

Holders Tullamore are represented by their 2nd XV and they should open the defence of their hard won trophy with a home win at Spollanstown against their struggling neighbours Portarlington.

Those with an eye for an upset will look at Cill Dara’s visit to Streamstown where they will face a Roscrea side that made it to the semi-final stage a year ago and are always hard to beat in the close confines of their home patch.

Dundalk slipped up in the opening round a year ago in Gorey and will tread warily to the Showgrounds to take on Athy as they endeavour not to bow out as quickly for the second year in succession.

Division 3 side Arklow should have no chance against Clondalkin but at home in the Oval and after a couple of good wins this month they should at least prove to be stubborn opposition, while Newbridge and Division 2B leaders New Ross must play at neutral Co Carlow, both clubs having incurred the wrath of the Branch resulting in them having to play away from home, a factor that will add a degree of unpredictability of the tie.

A couple of games are hard to predict as there are no crossover references between Leinster and Metro Leagues so it’s hard to know exactly what might happen in Boyne 2nd XV v Portlaoise and Wicklow v Skerries 2nd XV while most people would expect Tullow to beat North Kildare at home in Black Gates and Ashbourne to comfortably see off visitors Edenderry in Milltown House.

Three teams have received byes into the 2nd round; they are Co Carlow, Enniscorthy and Rathdrum.

If you want to know who I picked as this year’s winner you’ll have to pick up a copy of Friday’s Herald where you’ll find it in the Leinster Rugby supplement.

The draw for the 2nd round will be made in Ashbourne RFC immediately after the Ashbourne v Edenderry tie and will be broadcast live on LMFM Radio.

The draw for the 2nd round of the Provincial Towns Cup which is sponsored by Cleaning Contractors will take place in Ashbourne Rugby Club on Sunday next immediately after the Ashbourne v Edenderry 1st round tie.

The draw will be broadcast live by LMFM local radio in Louth and Meath is timed for 4:45 pm approx.

The 1st round fixtures which are on Sunday at 2:30 pm:

Byes into 2nd round: